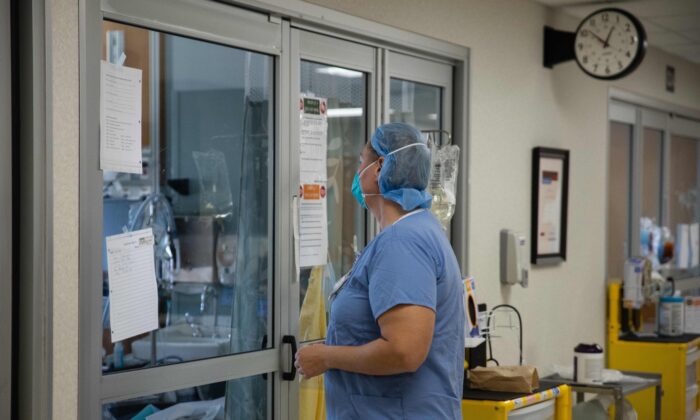 A healthcare professional prepares to enter a Covid-19 patient's room in the ICU at Van Wert County Hospital in Van Wert, Ohio on November 20, 2020. (Megan Jelinger/AFP via Getty Images)

A Butler County judge in Ohio has ordered a hospital to administer Ivermectin to a ventilated COVID-19 patient, granting an emergency relief filed by the patient’s wife.

Smith, 51, is a Verizon Wireless engineer in Butler County. According to the lawsuit (pdf) filed by his wife Julie Smith, Smith tested positive for COVID-19 on July 9, and he was admitted to West Chester Hospital on July 15. On the same day, he was moved to an intensive care unit (ICU).

Smith’s condition continued to decline, and he was placed on a ventilator on Aug. 1. By Aug. 19, the ventilator was operating at 80 percent volume, with Smith’s chances of survival dropping to less than 30 percent, court documents read. At that time, the hospital claimed to have exhausted all options in its COVID-19 treatment protocol.

“At this point, there is nothing more the defendant can do, or will do, for my husband,” Julie wrote in an affidavit included in her complaint.

“However, I cannot give up on him, even if the defendant has,” Julie continued. “There is no reason why the defendant cannot approve or authorize other forms of treatments so long as the benefits outweigh the risks.”

Julie had read about some lawsuits reported by Chicago Tribune and The Buffalo News where patients in severe condition from COVID-19 later recovered after being given Ivermectin.

These patients had won lawsuits forcing their hospitals to treat them with Ivermectin. The plaintiffs in these cases were all represented by attorney Ralph Lorigo, chairman of New York’s Erie County Conservative Party, who later became one of Julie’s attorneys.

According to court documents, Julie requested that the hospital treat her husband with Ivermectin, but the hospital refused to even though she offered to release them from “any and all” responsibility.

Julie then sought medical advice from Dr. Fred Wagshul, who later prescribed Ivermectin to her husband. But the hospital still refused to do so, prompting her to file a lawsuit against the hospital.

“With absolutely nothing to lose, with little to no risk, and with the defendant likely to begin palliative care, there is no basis for it to refuse Dr. Wagshul’s order and prescription to administer Ivermectin,” Julie said in the affidavit.

Wagshul is a founding member of the Frontline COVID-19 Critical Care Alliance (FLCCC), a nonprofit organization that is working during the pandemic to develop effective treatment protocols to prevent COVID-19 infection as well as treat patients with COVID-19.

In October of 2020, FLCCC adopted Ivermectin as a core medication in its protocols for preventing and treating COVID-19. Its website references many recent studies reporting Ivermectin to be a safe, effective, and inexpensive drug against COVID-19, the disease caused by CCP (Chinese Communist Party) virus.

“Ivermectin is so safe,” Wagshul told Dayton247Now. “It essentially has no drug interactions and no side effects.”

The UC Health hasn’t responded to a request from The Epoch Times for comment. According to the Ohio Capital Journal, it hasn’t challenged the judge’s ruling.

Ivermectin is a drug that has been approved by the Food and Drug Administration (FDA) to treat certain infections caused by internal and external parasites. A Japanese scientist and an Irish-American scientist were awarded the Nobel Prize in 2015 for their discovery of Ivermectin, given the drug’s success at improving the health and wellbeing of millions of individuals infected with river parasites in the poorest regions of the world.

“Don’t do it. There’s no evidence whatsoever that it works, and it could potentially have toxicity,” Fauci told CNN on Sunday. “There’s no clinical evidence that indicates that this works.” 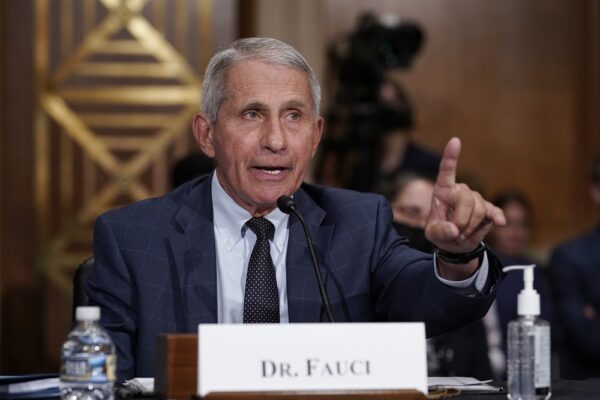 Last Thursday, the Centers for Disease Control and Prevention (CDC) issued an official health advisory (pdf), reiterating its opposition to the use of Ivermectin for COVID-19 treatment.

“Adverse effects associated with Ivermectin misuse and overdose are increasing, as shown by a rise in calls to poison control centers reporting overdoses and more people experiencing adverse effects,” the advisory continued.

FDA warned on its website that taking large doses of Ivermectin is “dangerous and can cause serious harm.” The agency also stressed that Ivermectin products for animals are different from products for people because animal drugs are often highly concentrated.

“Such high doses can be highly toxic in humans,” FDA said.