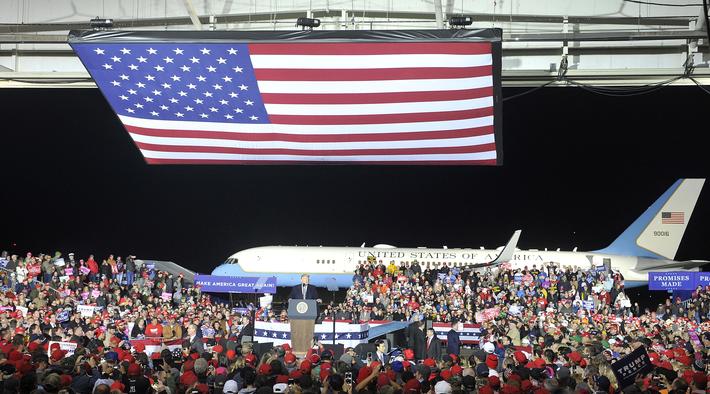 President Trump is launching a daily schedule of online campaign programming that, combined with daily White House briefings, is part of a double-barreled strategy to woo voters virtually after the coronavirus canceled live events.

The Trump campaign plans to broadcast one marquee event on its website and social media channels each day this week and nearly every Monday through Saturday in the weeks ahead. The programming is an acceleration of efforts to reach voters amid a public health crisis that grounded the president’s robust itinerary of stadium rallies and roundtables, as well as similar gatherings hosted by prominent supporters.

This blueprint for aggressive virtual engagement is dovetailing with the nationally televised news conferences Trump leads from the White House almost seven days a week, during which he details the administration’s progress toward bringing the coronavirus pandemic to heel.

With the coronavirus pandemic taking time-tested methods for appealing to voters off the table, the major 2020 campaigns are scrambling for suitable substitute strategies with just seven months to go until Election Day. In place of field staff knocking on doors to turn out the vote, campaigns are using text messaging. Instead of rallies and town hall meetings to grow coalitions, campaigns are holding a range of virtual events and broadcasting them on the internet.

The Trump campaign has already held a few such events that each attracted more than 1 million views. This week, the president’s team unveiled a full slate of online programming: on Monday, Black Voices for Trump; on Tuesday, Team Trump Online; on Wednesday, American Heroes Series; on Thursday, Women for Trump Empower Hour; on Friday, Team Trump Online; and on Saturday, War Room Weekly.

“The Trump campaign is being smart,” Republican strategist Chris Wilson said Monday. “Any candidate or campaign sitting at home just waiting for this to end is making a likely fatal mistake.”