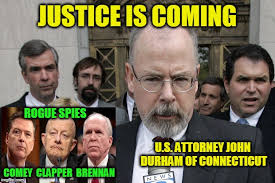 Late last week the FBI document that started the Trump-Russia collusion fiasco was publicly released. It hasn’t received a lot of attention but it should, because not too long from now this document likely will be blown up and placed on an easel as Exhibit A in a federal courtroom.

The prosecutor, U.S. Attorney John Durham, will rightly point out that the document that spawned three years of political misery fails to articulate a single justifiable reason for starting the “Crossfire Hurricane” investigation.

Those of us who have speculated there was insufficient cause for beginning the investigation could not have imagined the actual opening document was this feeble. It is as if it were written by someone who had no experience as an FBI agent.

Keep in mind the FBI cannot begin to investigate anyone, especially a U.S. citizen or entity, without first creating a document that lists the reasonably suspicious factors that would legally justify the investigation. That’s FBI 101, taught Day 1 at the FBI Academy at Quantico, Va.

To the untrained eye, the FBI document that launched Crossfire Hurricane can be confusing, and it may be difficult to discern how it might be inadequate. To the trained eye, however, it is a train wreck. There are a number of reasons why it is so bad. Two main ones are offered below (if you would like to follow along, the document is here):

On that basis alone, the document is an absurdity, violative of all FBI protocols and, therefore, invalid on its face. An agent cannot approve his or her own case; that would make a mockery of the oversight designed to protect Americans. Yet, for this document, Peter Strzok was pitcher, catcher, batter and umpire.

In addition, several names are listed in a “cc” or copy line; all are redacted, save Strzok’s, who, for some reason, felt it necessary to copy himself on a document he sent from himself to himself.