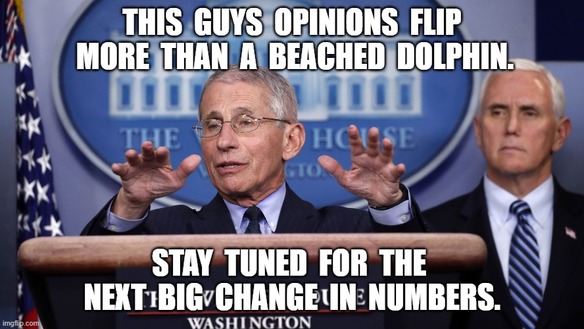 This madness has to end now.

Every single lockdown order inflicted on the American people these past few months needs to be rescinded immediately.

Once that’s done, Fauci has to be investigated to find out why on earth he pushed these catastrophic restrictions on us using predictions he knew to be false. He also needs to be indicted for peddling his lies before Congress and held criminally accountable for all the death and devastation he’s caused.

In case you hadn’t heard, Matt Margolis over at PJ Media is reporting that the CDC now estimates the case fatality rate (CFR) of COVID-19 to be only .4 percent. As Margolis points out, that’s much lower than the numbers used to frighten us into these lockdowns. But there are a few factors he doesn’t mention, making it clear we were unspeakably deceived rather than merely victims of some disastrous but ultimately honest error.

The CFR is the death rate restricted to just those cases in which someone with symptoms had a test confirming they were infected. Since it factors in neither asymptomatic cases nor unconfirmed symptomatic ones, it’s going to substantially overstate the infection fatality rate (IFR), which is the  rate among the totality of all those infected.

And, of course, it’s the IFR which represents the odds a random person who contracts the virus has of dying. The CFR, on the other hand, isn’t even all that interesting if you’re just a member of the public trying to evaluate how dire a threat we’re facing. It gets massively skewed by the over-representation of serious cases among those who get tested and because it doesn’t factor in asymptomatic infections at all.

The CDC is also now estimating that only 65% of those who contract the COVID-19 virus actually wind up with any symptoms. That means the IFR will be at most 65% of the CFR, or .26% since the latter is only counting symptomatic cases. In fact, given that testing has been rare even among those who show symptoms, it’s bound to be substantially lower.