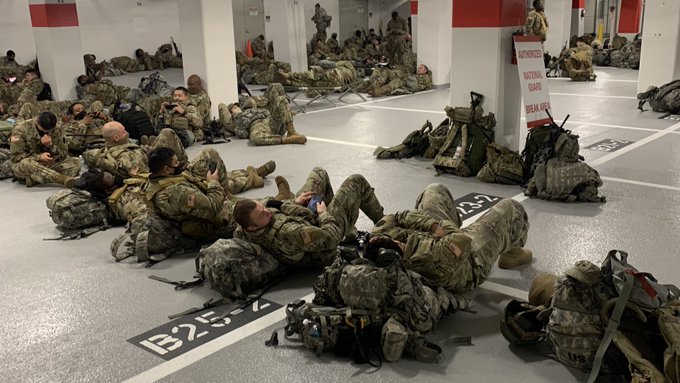 Members of the National Guard have been allowed back into the Capitol Complex after a slate of lawmakers voiced their outrage at guardsmen being banished to a parking garage as a rest area, a guardsman told CNN.

The Guard will now be allowed to rest in the US Capitol Visitor Center, the guardsman said.

The change comes after thousands of National Guardsmen were moved to a parking garage after they were told they could no longer use space within the US Capitol Complex, including areas like the cafeteria of a Senate office building, as a rest area, multiple Guardsmen told CNN.

Prior to Thursday morning, several areas throughout the Capitol Complex were designated as authorized rest areas where members of the Guard could take breaks from their shifts protecting Capitol. By Thursday morning, all those areas had been cleared out and their designations removed, the Guardsmen said.

"We honestly just feel betrayed," one guardsman told CNN earlier Thursday, noting that a day before, congressmen had come by for photos with the different National Guards units that came to Washington to support security around the inauguration. "After everything went seamlessly, we were deemed useless and banished to a corner of a parking garage."

News of the guardsmen's situation, which was first reported by Politico, drew swift outrage from lawmakers who tweeted their concern over the situation.

Sen. Mike Lee, a Utah Republican, wrote, "Very upset by this story but I have been in touch with the Utah National Guard and they are taken care of. My staff and I are investigating what happened here and will continue working to fix this situation."

Sen. Tammy Duckworth, an Illinois Democrat, tweeted, "Just made a number of calls and have been informed Capitol Police have apologized to the Guardsmen and they will be allowed back into the complex tonight. I'll keep checking to make sure they are."