Last week, CNN was tactically baffled by a simple question that grows stranger by the day: Why are investigators struggling to build a murder case in the death of US Capitol Police Officer Sicknick?

The stakes are high: Officer Sicknick’s death is the only purported death by a largely tourist crowd that was let into the building by police, stayed inside the velvet ropes, seemed at least partly there out of confusion, for social media clout, or just for the memes, and that even the New York Times conceded caused limited property damage.

That’s a far cry from murder. Yet MAGA is being blood libeled with a felony murder charge in the court of public opinion and at Donald Trump’s impeachment, while potentially exculpatory evidence is silenced or sealed. As the Washington Uniparty mulls domestic terror laws over a MAGA Bloodbath, it increasingly looks like MAGA may have been Bloodbathed. Time is of the essence for the Feds to release all evidence, damn the guilty, or the clear the MAGA movement of these serious allegations.

So why are the Feds hiding the medical report?

In an unforgivable shocker, the House Trial Memorandum itself, which sets forth the very impeachment charges for which the 45th President stands accused, names Trump liable for “insurrectionists” that “killed a Capitol police officer by striking him in the head with a fire extinguisher.” Their source? The New York Times.

But the toilet paper Times left a real stinker inside this one. Because every claim they made, every detail conveyed, was a lie.

Law enforcement officials now tell CNN that there was no fire extinguisher blow, no bloody gash, and no blunt force trauma to Sicknick’s body when he died.

Not only that, but it is increasingly unclear when, where and if Sicknick was even rushed to the hospital.

As it turns out, multiple hours after the protest had already concluded, Sicknick texted his own brother Ken that very night he was basically fine, other than being “pepper sprayed twice,” confirming he was safe and “in good shape.”

They came from media reporters.

But then the story got stranger. In a dark, twisted echo of Monty Python’s “bring out your dead” scene, it turned out Sicknick was not dead yet. 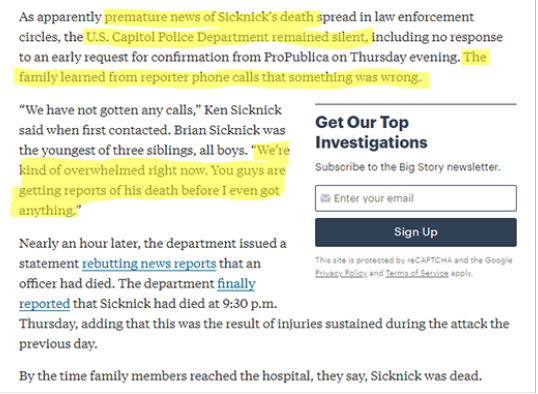 The US Capitol Police responded in a public statement late that Thursday evening that swirling media reports were untrue. Sicknick was still alive.