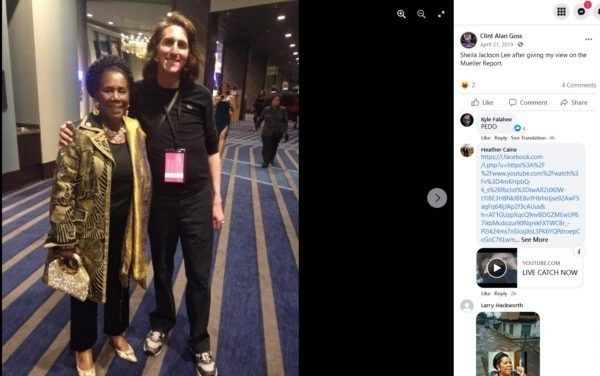 A man seemingly identified as LGBT activist Clint Alan Goss was captured on video during a child predator sting operation by a YouTuber named Ghost Change who streamed the interaction.

Goss claimed in the video and allegedly in explicit text messages to work for House Speaker Nancy Pelosi and other high profile Democrats, and appears to have been photographed alongside prominent Democrats including Rep.

In the video, it is revealed that Goss allegedly solicited sexual favors from an individual he believed to be a 14-year-old boy online prior to being approached by the YouTuber in an apparent sting operation.

The video was removed from the YouTube channel but we have a part of the video that was sent to us this morning.

“To be honest, um, I don’t understand where you’re coming from,” mutters Goss. “You don’t understand? So why don’t we have a conversation about it, cause I can get you some help, or I can get you locked up,” said the streamer. Ghost Change then states Goss’s full name, and explains that he “knows everything about” him. Goss replies, “So you know I work for Nancy Pelosi, I work for Hillary Clinton,” and denied any “sexual contact” during the chats apparently in the possession of Ghost Change.
read more and see the video:
https://defiantamerica.com/lgbt-activist-caught-in-a-pedophile-sting-claims-that-he-works-for-hillary-clinton-and-nancy-pelosi-video/