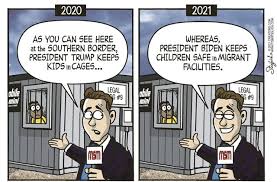 Fresh internal documents from the Department of Health and Human Services show how quickly the number of child migrants crossing the border is overwhelming the administration's stretched resources.

Driving the news: In the week ending March 1, the Border Patrol referred to HHS custody an average of 321 children per day, according to documents obtained by Axios. That's up from a weekly average of 203 in late January and early February — and just 47 per day during the first week of January.

Meanwhile, some of President Biden's top officials responsible for immigration policy are planning a trip to the U.S.-Mexico border this weekend, sources tell Axios.

Behind the scenes: HHS has already moved to open overflow shelters and to increase the speed with which it releases children to caretakers already in the U.S.