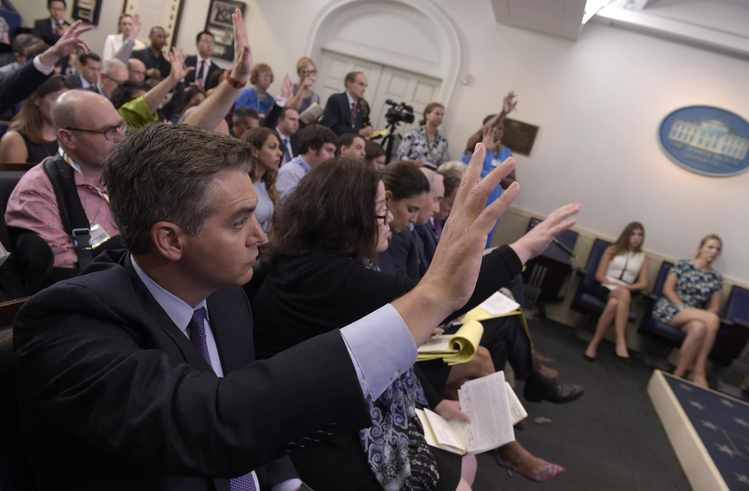 Journalists have just given voters a terrific reason to re-elect Trump...to watch their hilarious angst.  Jeremy Barr in Saturday's Hollywood Reporter has chronicled the whining by the press at the prospect of being forced to cover four more years of Donald Trump in the Oval Office.

It is obvious, though they lamely try to hide it to no avail, that most of the Washington press corps suffers from extreme Trump Derangement Syndrome and the idea of continuing to cover Trump for another term has sent them into complete despair. So for many voters, casting their ballots for Trump would be an act of very pleasurable schadenfreude knowing how it would send so many members of the press into a deep, deep depression.

Barr reveals just how tortuous another four years of Trump could be for much of the press in "Four More 'Exhausting' Years? Trump Reporters Mull Covering a Second Term."

"I don't know anybody who wants to do another four years of this news cycle," a senior CNN producer says. The first year of the Trump presidency was a year of calibration for the nation's top journalists, who learned to keep up with a politician who revels in exhausting the press corps, launching news cycles with early-morning, late night and weekend tweets.

The next two years, 2018 and 2019, were even more exhausting, as journalists scrambled to cover government shutdowns, congressional hearings, a Supreme Court nomination, the president's flirtation with North Korea, the Mueller Report and impeachment.

And who's fault was that? Wasn't it the mainstream media that for two solid years was constantly hyping the Trump-Russia collusion conspiracy theory until the Mueller Report revealed it to be nothing but fake news?