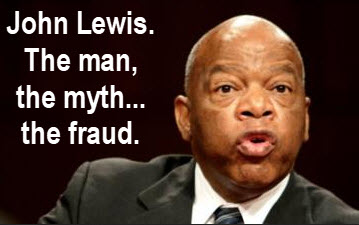 Revisionist history seems to be one of liberalism’s foremost platform planks. When history, real history doesn’t fit their agenda, they just ignore it, and replace it with a myth.

The problem liberals have with history is that it tells a story of the past, and while it has been said that the victors get to write the history, thus implying a grey area as to accuracy, nonetheless, revisionist history simply dismisses the facts and replaces them with a myth.

Historical myths, such as those conjured up by liberals, and purported as being truth, are anything but, and just as liberals often invent victims from thin air where no real victims can be found, they also often invent heroes of their cause where none can be offered by reality.

John Lewis is a prime example of this.