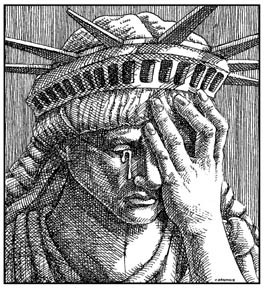 What Biden and Harris have exposed for all of America, and the world, the darkest side of the Marxist Democrat ideology, but we're not buying it!

In the early part of the 19th century Alex de Tocqueville once noted, “America is great because America is good; if America ever ceases to be good, she will no longer be great.” What did de Tocqueville mean by good? At his time in America, good was what was expressed in the Declaration of Independence, the rule of law provided by the United States Constitution for government’s behavior, and most important, the guidelines God provided for all people in the Ten Commandments and the Holy Bible.

The values de Tocqueville used were the same values the Founding Fathers based their actions on. But, the Founding Fathers recognized the potential downfall of their wonderful creation if Americans fell victim to the foibles of human nature that have existed throughout human history. They foresaw what the United States of America would become and expressed it in various ways.

What are your personal observations about America in 2022? By de Tocqueville’s and the Founder’s standards, is America good? By your standards, is the current American government good?

In my opinion, America needs some work to become great again.

The elitist, Marxist Democrats must be removed from elected office everywhere they exist. That will start with local elections and culminate with the November 8, 2022, mid-term election nationally.

However, that is only a start on America’s road back to greatness. The war on the insidious rule of elite American Marxism will take a tremendous and concentrated effort for years to come. It will not end in 2022, 2024, or even 2026.

The Marxist Democrat Party cheated enough to get Joe Biden and Kamala Harris elected. This is the best thing that could possibly have happened for the future of America because Biden and Harris have exposed for all of America, and the world, the darkest side of the Marxist Democrat ideology. They have also exposed a degree of lawlessness never before seen and can no longer be ignored. And man-oh-man, Americans of all political stripes don’t like what they see!

Now, back to my original question: Is America still great?