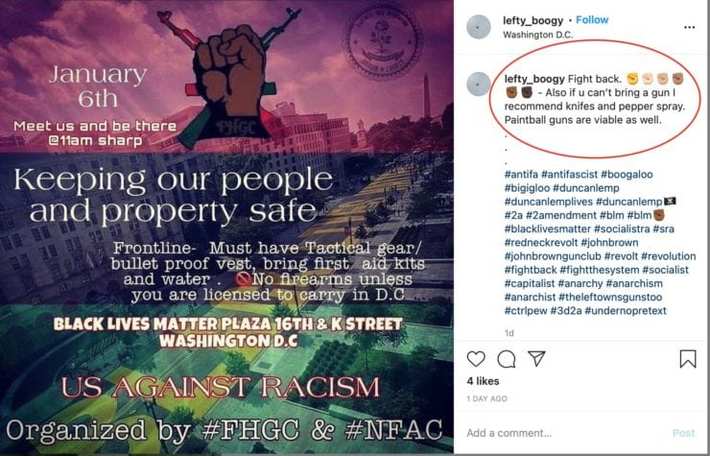 Last night, while scrolling through the account of the Antifa/BLM activist John Sullivan, who was part of the Capitol building siege on Wednesday, we came upon a friend of the violent left-wing activist who goes by the name of “lefty_boogy” on Instagram.

In his Instagram feed, “lefty_boogy” advertised for radicals to meet at 11 am at the newly designated “Black Lives Matter Plaza” in Washington DC on January 6, the same day that up to 1 million Trump supporters planned to flock to DC to show their support for our president and to express their frustration over what million believe was a stolen election in November.

In the comment section, “lefty_boogy” tells his followers, “Also if u can’t bring a gun I recommend knifes and pepper spray. Paintball guns are viable as well.

There’s been an awful lot of talk about the violent siege of the Capitol building on Wednesday, but as usual, there is no discussion about the violence planned by Black Lives Matter or Antifa against Trump supporters. And there’s been ZERO mention of how Antifa infiltrated the Trump supporters or how they embedded themselves in the massive crowd of good, honest and law-abiding citizens.