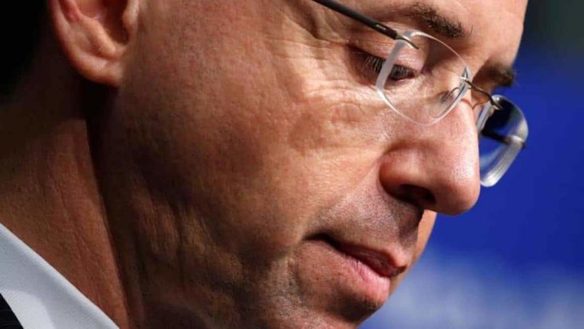 Former Deputy Attorney General Rod Rosenstein admitted on Wednesday there was no evidence of collusion by August of 2017. Despite the evidence not supporting the allegation the Trump campaign colluded with Russians to influence the 2016 election, he allowed the investigation to continue for another year and a half.

The bombshell admission came during a heated hearing before the Senate Judiciary Committee, which is investigating wrongdoing during the F.B.I.’s Crossfire Hurricane investigation that led to the appointment of Special Counsel Robert Mueller.

“The whole concept, that the campaign was colluding with the Russians, there was no ‘there’ there in August of 2017, do you agree or not?” Chairman Lindsey Graham, R-S.C., asked Mr. Rosenstein.

“I agree with the general statement,” he replied.

The concession was just one of many that came during the hearing. On several occasions, he admitted having little knowledge about the F.B.I. probe. He also through other actors under the bus, claiming that fired former F.B.I. Deputy Director Andrew McCabe “was not fully candid with me” regarding bureau proceedings.