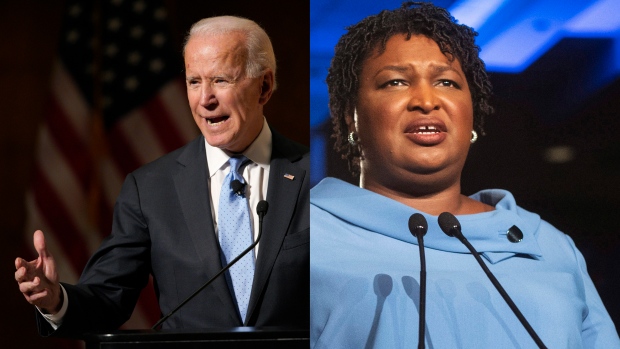 Former Georgia gubernatorial candidate Stacy Abrams, having previously refused to accept defeat, stands atop her imaginary governor platform and says she will be honored to be on the ticket as Joe Biden’s vice-president selection. This is the second time Abrams has implied her addition to the ticket.

[Washington DC] Stacy Abrams said Thursday that she would be “honored” to be former Vice President Joe Biden’s running mate.

[…] “I would be honored to be on the campaign trail as a running mate,” she said. “But that is a process that you can’t campaign for, and I’m not campaigning for. I’m just being straight-forward.”  (read more)

If Biden remains the nominee through the convention (not guaranteed), then Abrams fits the mold for a predictable female of color VP.  Biden will select a female, but the race aspect is a 50/50 proposition depending on the candidate.