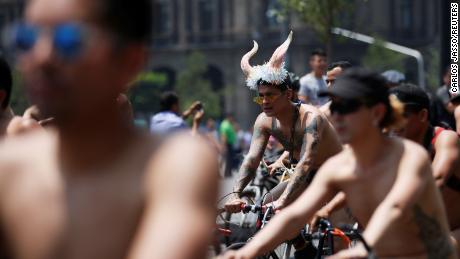 Oregon bicyclists have received some bad news — the World Naked Bike Ride has been canceled due to the COVID-19 crisis.

The annual June bike ride, which aims to raise awareness for dangers cyclists face on the road while also protesting “against society’s dependency on oil,” has been altered due to the coronavirus pandemic.

However, Portland doesn't have to put its pants on just yet.

The annual event raises awareness for dangers cyclists face on the road, while also protesting “against society’s dependency on oil."

According to the website for Oregon’s World Naked Bike Ride, the collective ride is pivoting to a “World Naked Bike Ride DAY,” with no start location, start time or designated route. With this change in place, the site is now encouraging people to hop on their bikes and pedal around in the buff on June 27th — as long as they practice proper social distancing.

The decision to modify the yearly event came back in April, when organizers announced on Facebook the 2020 ride “will look vastly different than years previous.”

On Portland’s official Facebook page for the naked ride, those in charge of the event declared June 27th World Naked Bike Ride Day, to take place during Pedalpalooza, a month-long summer event in the city.

“As we've said, people are encouraged to ride naked all day, and discouraged from gathering with others,” one of the Facebook posts reads.

World Naked Bike Ride is not limited to Oregon. According to the website, 70 cities all around the world participate in the exhibitionist style of athleticism.