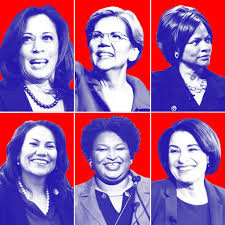 Trouble is swirling in the Biden basement as more corroboration emerges about Tara Reade’s sexual assault allegation against the former vice president. We have passed the point where Reade’s story has as much, if not significantly more evidence backing it up than Christine Blasey Ford’s allegations against Justice Brett Kavanaugh.

The good news for Biden is that Kavanaugh survived and now sits on the Supreme Court. The bad news for Biden is that every one of the top women he is considering to be his running mate seems to think that was result was a horrible miscarriage of justice. As Rebecca Traister points out in New York Magazine piece called “The Biden Trap,” any of these women would be putting themselves in a very difficult position.

So let’s have a look at what they all said back in 2018 when the Kavanaugh fight was roaring, and see if we can square it with anything other than a call for Biden to drop out. Because whoever gets picked is going to be spending a whole lot of time doing exactly that.

Sen. Amy Klobuchar of Minnesota had one of the more testy and vibrant exchanges with Brett Kavanaugh to occur during his hearings, when Kavanaugh punched back in frustration asking her if she had ever been black out drunk. He later apologized. But throughout the process she was adamant that an FBI investigation take place, and scoffed at those opposed to it saying, “They’re afraid of what they’re going to find out.”

After the courageous and compelling testimony from Dr. Christine Blasey Ford yesterday, it is shameful that Kavanaugh's nomination is being rushed forward.

I believe women, and I believe survivors of violence always deserve to be supported and to have their voices heard. https://t.co/rtT1PQr4Zq

Back in 2018, when addressing Ford’s allegations Democratic Sen. Kamala Harris of California said, “I believe her..........."

I still believe Dr. Christine Blasey Ford. And like the man who appointed him, Brett Kavanaugh should be impeached.