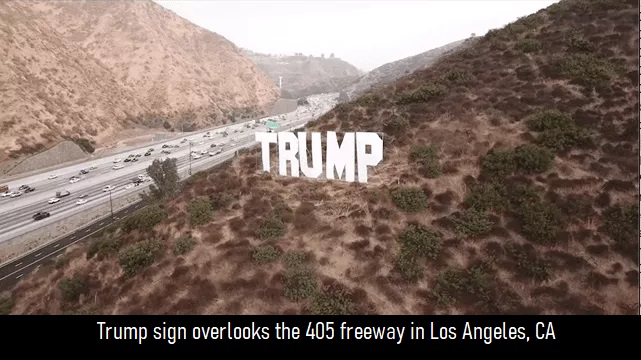 On October 6th, 2020 Los Angeles woke up to a giant TRUMP sign in the foothills overlooking one of the busiest stretches of road in the United States, the 405 freeway.

The sign was immediately removed by the City of Los Angeles, citing traffic hazard worries, despite being on private land. Although the antics made national news, no one came forward to claim responsibility for the sign.

RedState was contacted by a person referring to himself as “Mr. Black”, who wanted us to know that the group responsible for the sign had not only been planning it since 2018, they had also produced their own campaign ad in support of Trump and aimed at California voters. I was given permission to share it (continue scrolling for video) and it qualifies as a “must watch” in every sense of the term.

Not only is it quick peek into the entire stealth process of installing the sign, it is a dramatic call to action not unlike the recent viral GOP congressional ad narrated by Senator Mitch McConnell.

Mr. Black and company seem to think so, and when you watch this video you may very well come away believing it yourself.

Wow. The group that installed that 405 freeway TRUMP sign has come forward with a pro-Trump campaign video and IT IS 🔥. Could @realDonaldTrump flip California? pic.twitter.com/qrTEN3z0jX