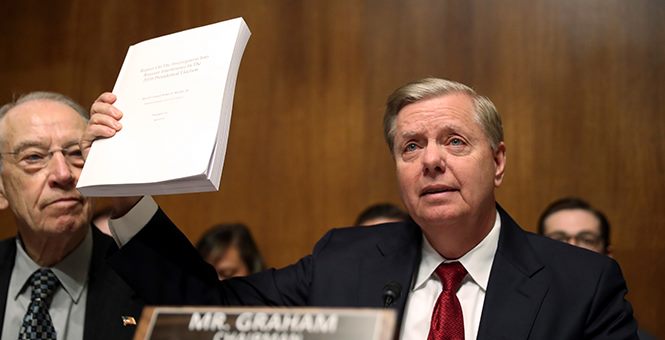 "As you are aware, Christopher Steele’s election reporting, on which the FBI relied to obtain FISA coverage on Carter Page, was based on information Steele obtained from a source network. In particular, Steele heavily relied on the information he obtained from an individual identified in the Inspector General’s FISA Report as the 'Primary Sub-source.' The FBI identified and interviewed the Primary Sub-source at least three times during the course of the Carter Page FISA investigation, including in January, March, and May of 2017," Graham wrote. "During these interviews, the Primary Sub-source substantially undercut Steele’s election reporting, calling into question the accuracy and reliability of any of Steele’s reports."

"In spite of this, the FBI continued to seek renewals for FISA coverage on Carter Page and never informed the Foreign Intelligence Surveillance Court of the credibility issues identified by the FBI’s interviews of the Primary Sub-source—whom the FBI internally found 'to be truthful and cooperative.' In fact, the FBI made it appear to the court that the Primary Sub-source corroborated Steele’s reporting," Graham continued.