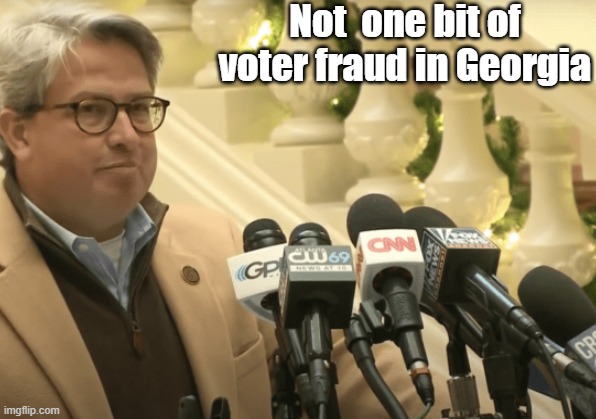 Georgia election official – and noted Trump-basher – Gabriel Sterling made a statement this afternoon announcing his official challenge to the voter registration of a woman who admitted to fraudulently voting using his home address in the 2020 election.

Sterling is the Voting System Implementation Manager for the state of Georgia. He discovered the fraudulent voter registration when the Democrat-aligned get-out-the-vote organization Fair Fight Action sent a reminder to vote in her name to his home.

Fair Fight was founded by Stacey Abrams in 2018 to combat alleged voter suppression in Georgia, including against election security standards which many Democrats claim are unnecessary and racist.

The woman in question, Meron Fissha, admitted to Fox 5 Atlanta that she voted using Sterling’s address in the 2020 election despite having sold the house to him over two years ago.

Sterling’s challenge alleged that she had moved to Maryland after selling the house in 2018, a state which – unlike Georgia – was not considered competitive in the 2020 presidential election.

Fissha claimed to Fox 5 that she is legally working and living in Atlanta but requested an absentee ballot to be sent to Maryland because she is temporarily staying there while taking care of her brother who has a medical issue. She also said she plans to “update” her voting address.

According to Sterling, Fissha also fraudulently voted using his address in the 2018 election. He suggested in a series of tweets that Fissha may have committed multiple crimes by voting repeatedly under a false registration and signing an oath attesting to information she knew was inaccurate.
read more here: https://nationalfile.com/breaking-georgia-election-official-admits-voter-fraud-happened-at-his-own-home-after-bashing-trump/