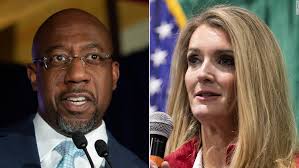 Warnock served as chairman of the board for the New Georgia Project in 2019 when election officials claim misconduct took place.

Under Georgia election rules, voting registration organizations like the New Georgia Project have to submit completed voter applications within 10 days they are received from the voter.

But officials allege during a 2019 registration effort, some 1,268 applications were submitted to the Gwinnett County elections office after the 10-day deadline.

The Board voted 3-0 to refer the investigation to Georgia Attorney General Chris Carr (R), with the board's lone Democrat joining Secretary of State Brad Raffensperger (R) in abstaining from the vote.

Neither Warnock nor the New Georgia Project responded to requests for comment from Forbes.

Warnock resigned his position with the New Georgia Project on Jan. 28, 2020.

Abrams founded the organization in 2014 and has gone on to have several disputes with election officials. In 2018, she launched a well-publicized bid for Georgia governor but lost by about 55,000 votes to Gov. Brian Kemp (R), who was then secretary of state for Georgia. Abrams blasted what she said were voter suppression efforts Kemp undertook as secretary of state to aid his gubernatorial campaign, such as purging voter rolls. In December, Raffensperger announced an investigation into the New Georgia Project and other voter registration groups, claiming they “sought to register ineligible, out-of-state, or deceased voters.”

Warnock narrowly defeated incumbent U.S. Sen. Kelly Loeffler (R-Ga.) in a runoff last month, on the same ballot that U.S. Sen. Jon Ossoff (D-Ga.) ousted incumbent U.S. Sen. David Perdue (R-Ga.). The double victory by Democrats in the Georgia Senate runoffs was enough to tip the scales in the U.S. Senate, with the makeup being a 50-50 split between Republicans and Democrats. Vice President Kamala Harris serves as the tiebreaking vote for Democrats if needed.