Federal law enforcement officials on Thursday arrested a man in Washington they call a “ringleader” in the recent attempt to destroy the Andrew Jackson statue in Lafayette Square near the White House.

Law enforcement sources tell Fox News that Jason Charter was arrested at his residence Thursday morning, without incident, and charged with destruction of federal property. He was arrested by the FBI and U.S. Park Police as part of a joint task force.

These sources add that Charter has connections to Antifa and was in a leadership role on the night of June 22 when a large group of protesters tried to pull down the statue.

CHARGES IN ATTEMPT TO TAKE DOWN JACKSON STATUE 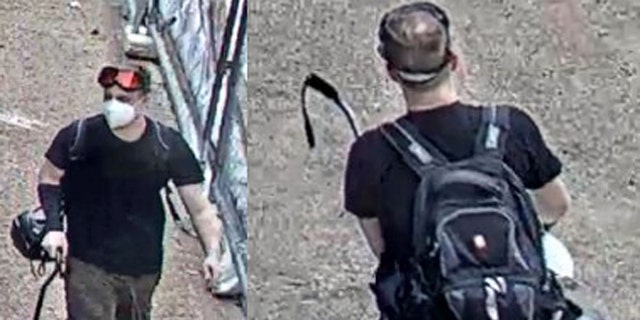 A screengrab of surveillance camera footage of Jason Charter, who the FBI accuses of destruction of federal property related to damage to monuments. (US District Court for DC court filing)

“They were very organized,” a federal law enforcement official said. “Charter was on top of the statue and directing people ... they had acid, chisels, straps and a human chain preventing police from getting to the statue.”

The FBI's criminal complaint against Charter attaches screengrabs of local news videos and accuses him of also being involved in the destruction of the Albert Pike Historical Statue in Washington this month.

Citing local news video, the FBI alleges that Charter is seen “standing over the toppled Pike Statue, pouring an unknown liquid onto the statue.”

The complaint said: “He is then observed waving others away from the statue, and squatting down behind the statue where his hands are not visible. Seconds later, the statue catches fire. Charter is seen standing over the flames as it burns.”