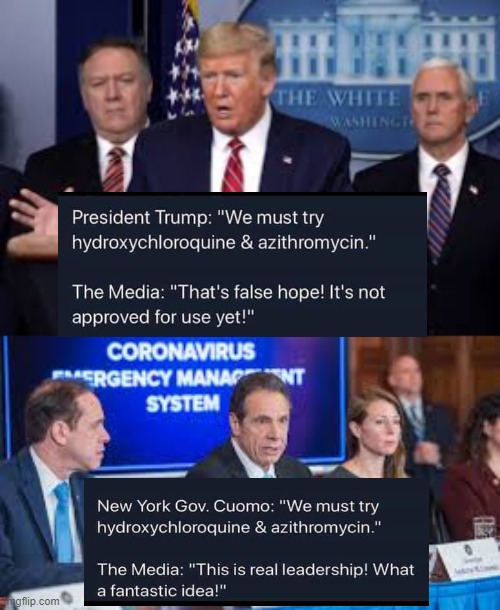 What are the Democrat governors in Nevada and Michigan going to do now? – The Food and Drug Administration issued an emergency use autorization on Sunday, approving hydroxycholoroquine and chloroquine for use in treating the Wuhan Virus, COVID-19, after numerous successful studies and test cases emerged over the past three weeks.

Democrat politicians and corrupt media outlets who are hoping this crisis lasts as long as possible in order to damage President Trump have been despicably down-playing the use of this safe, well-known, inexpensive and plentiful malaria treatment for the past two weeks. Two Democrat hack governors – Steve Sisolak in Nevada and the Soros stooge Gretchen Whitmer in Michigan – are so depraved that they actually issued orders last week to prevent the use of this effective treatment for their own citizens, in what can fairly be described as an active effort to enhance the body count.

The corrupt Democrat activists at Politico were so upset with this action that the first paragraph of the story they ran on it Sunday night read as follows:

The Food and Drug Administration on Sunday issued an emergency use authorization for hydroxychloroquine and chloroquine, decades-old malaria drugs championed by President Donald Trump for coronavirus treatment despite scant evidence.

The drug hasn’t just been “championed” by President Trump – it has in fact been championed by doctors all over the world. We have now seen multiple successful, peer-reviewed case studies and strong anecdotal evidence in France, in South Korea, in Germany and in Orange County, New York, where Dr. Vladimir Zelenko successfully treated 350 patients with zero deaths. Those are just the examples I’m aware of.

Naturally, the hacks at Politico managed to find an ex-Obama official who slammed the FDA’s move:

“I would like to see who at FDA’s [Medical Countermeasures Initiative] signed off on this EUA despite the total lack of scientific evidence that chloroquine/hydroxychloroquine are beneficial in the treatment of COVID-19,” tweeted Luciana Borio, who served as FDA’s acting chief scientist between 2015 and 2017. “EUA is supposed to be issued when the evidence indicates that benefits outweigh the risks.”