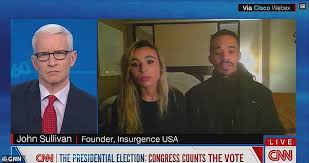 John Sullivan, leader of the far-left group “Insurgence USA,” is now facing accusations of not complying with his terms of release.

He was released conditionally without bail on Jan. 15, after he was arrested and charged for his alleged activities at the U.S. Capitol amid the breach of the building on Jan. 6.

According to the Washington Examiner‘s review of a court document from last week, a probation officer said that he “violated the conditions of supervision.”

The DOJ said that Sullivan has been charged “with one count of knowingly entering or remaining in any restricted building or grounds without lawful authority, one count of violent entry and disorderly conduct on Capitol grounds, and one count of interfering with law enforcement engaged in the lawful performance of their official duties incident to and during the commission of civil disorder.”

Probation officer Josh Cahoon says that Sullivan violated the term of “limited internet access (computer and internet use, as approved)” on four separate days while being in the conditional release.

The violations were not further specified.

He was released under the condition that he surrenders his passport, wears a GPS monitor, undergoes a mental health check, and remains home unless for court-approved activities—including work, religious services, and medical treatment.