The ad, now removed by Facebook, denounced Antifa, the decentralized movement of far-left agitators known for acts of domestic terrorism and political violence.

During the George Floyd riots, Attorney General William Barr described the actions of Antifa as domestic terrorism, and President Trump has also confirmed that he intends to label Antifa a domestic terrorist organization.

The now-deleted Trump ad featured an inverted red-and-black triangle to symbolize the Antifa movement, which uses the red-and-black color scheme in their badges, flags, and propaganda as a form of ideological identification. Red-and-black are the historical colors of the anarcho-communist movement, and red triangles are an Antifa symbol according to products available for purchase. 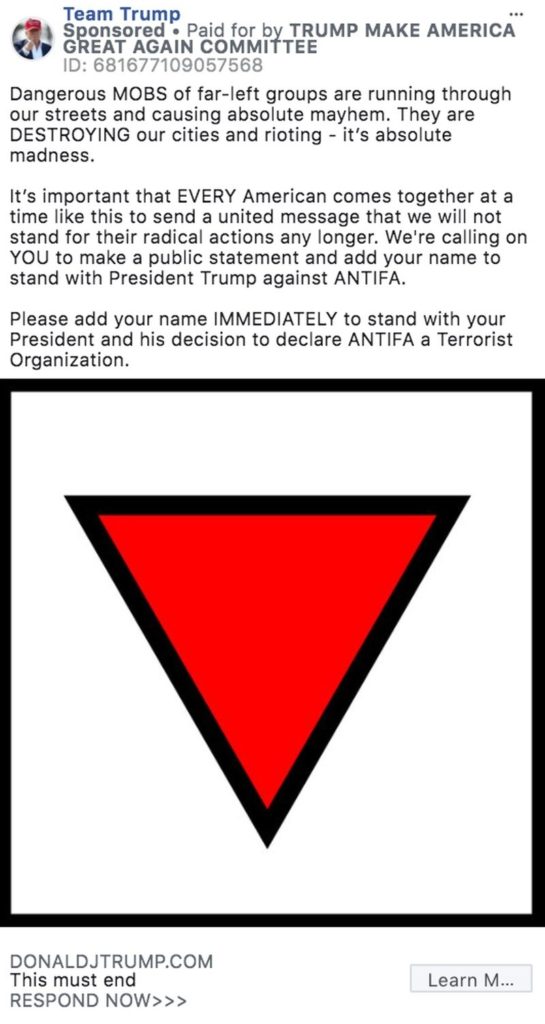 Dangerous MOBS of far-left groups are running through our streets and causing absolute mayhem. They are DESTROYING our cities and rioting – it’s absolute madness.

It’s important that EVERY American comes together at a time like this to send a united message that we will not stand for their radical actions any longer. We’re calling on YOU to make a public statement and add your name to stand with President Trump against ANTIFA.

Please add your name IMMEDIATELY to stand with your President and his decision to declare ANTIFA a Terrorist Organization.

But Facebook, and far-left organizations that regularly run cover for Antifa, said the red-and-black triangle was a “hate” symbol because it is similar to a symbol used by Nazi Germany in concentration camps.