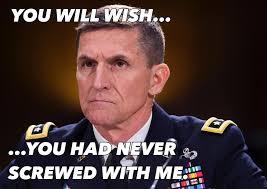 The Justice Department this week provided Michael Flynn’s lawyers with a long-rumored government memo which shows that FBI officials did not believe that the former national security adviser intentionally lied in a White House interview at the center of his legal battle.

The memo, dated Jan. 30, 2017, and published Friday, also said that FBI investigators did not believe that Flynn was working as an agent of Russia.

The memo said that the FBI briefed the Justice Department’s national security division and office of the deputy attorney general on Jan. 25, 2017, a day after the Flynn interview.

“FBI advised that based on this interview, they did not believe General Flynn was acting as an agent of Russia,” the draft memo said.

The memo said that the FBI agents who interviewed Flynn, Peter Strzok and Joe Pientka, believed that Flynn’s statements regarding his conversation with Kislyak was inconsistent with a transcript that the FBI had of the phone call. The bureau was monitoring Kislyak’s communications under the Foreign Intelligence Surveillance Act (FISA).

According to the memo, Strzok and Pientka did not believe that Flynn believed he was lying during the White House interview.

“FBI also advised that although they recognized the statements were inconsistent with the FISA collection, they believed that Flynn believed what he was telling them,” the memo said.

“FBI advised that they believed Flynn believed what he was saying was true,” it continues. “FBI recognized the discrepancy between the statements and the actual calls, but determined that Flynn was not acting as an agent of Russia.”