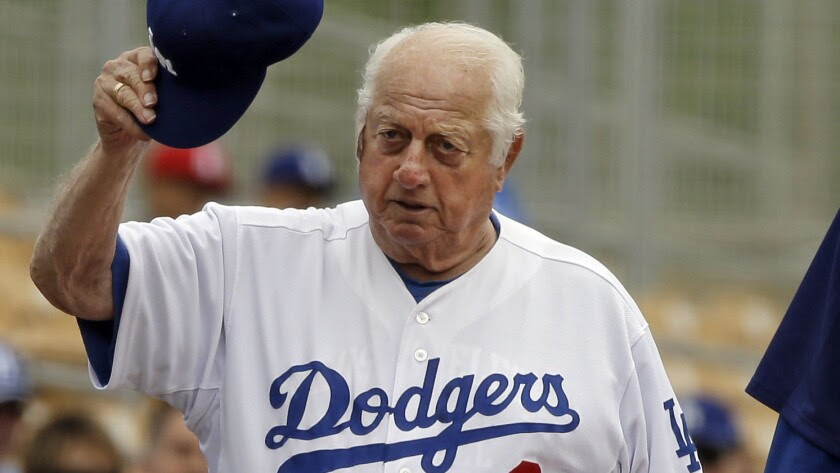 By HELENE ELLIOTT
{ latimes.com } ~ Tommy Lasorda, who in 20 years as the Dodgers manager won two World Series championships, four National League pennants and eight division titles and always insisted that he bled Dodger blue out of loyalty to the organization, has died at age 93.

The vibrant and voluble Lasorda spent 71 seasons with the Dodgers and was among the few remaining links to the club’s Brooklyn roots. In and out of the hospital in recent years for heart, back and shoulder problems, Lasorda died of a heart attack Thursday night, according to the Dodgers. He had returned to his Fullerton home Tuesday from an extended stay in the hospital and at 10:09 p.m. Thursday suffered a sudden cardiopulmonary arrest. He was transported to the hospital with resuscitation in progress and was pronounced dead at 10:57 p.m.

A friend to presidents and Little Leaguers, a devout Catholic with a talent for rapid-fire profanity, a self-promoter who tirelessly raised funds for convents and disaster victims through banquets and speeches, Lasorda spanned several eras in baseball and — along with Vin Scully and Sandy Koufax — achieved near-mythical status among loyal Dodger fans.

“My family, my partners and I were blessed to have spent a lot of time with Tommy,” said Mark Walter, Dodgers owner and Chairman. “He was a great ambassador for the team and baseball, a mentor to players and coaches, he always had time for an autograph and a story for his many fans and he was a good friend. He will be dearly missed.”

“In a franchise that has celebrated such great legends of the game, no one who wore the uniform embodied the Dodger spirit as much as Tommy Lasorda,” Dodger president and CEO Stan Kasten said. “A tireless spokesman for baseball, his dedication to the sport and the team he loved was unmatched. He was a champion who at critical moments seemingly willed his teams to victory. The Dodgers and their fans will miss him terribly. Tommy is quite simply irreplaceable and unforgettable.”

He was voted into the Baseball Hall of Fame by the veterans committee in 1997, his first year of eligibility, and the Dodgers later retired his uniform number, 2. Four years after he retired as a major league manager, he guided the lightly regarded U.S. Olympic baseball team to a gold medal at the 2000 Sydney Games. He retained the title of special advisor to the Dodgers’ chairman, most recently reporting directly to controlling owner Mark Walter. His last known public appearance was at Game 6 of the 2020 World Series in Arlington, Texas, where he saw the team he guided for so many years finally win another title.

"Lasorda’s passion, success, charisma and sense of humor turned him into an international celebrity, a stature that he used to grow our sport,” MLB commissioner Rob Manfred said in a statement. “Tommy welcomed Dodger players from Mexico, the Dominican Republic, Japan, South Korea and elsewhere — making baseball a stronger, more diverse and better game.”

As a player, Lasorda was a fearless but unpolished left-handed pitcher who was demoted to the minor leagues when the Dodgers needed to open a roster spot for a promising kid named Sandy Koufax. Lasorda compiled an 0-4 record over parts of three seasons with the Brooklyn Dodgers and Kansas City Athletics and spent 14 seasons in the minor leagues before he began working his way up the ladder of the Dodger organization as a manager.

Lasorda ate with the same gusto that he managed, earning the nickname “Tommy Lasagna.” Although he famously became a pitchman for a weight-loss aid and shed 40 pounds on a dare in 1988, he was instantly recognizable for his rotund figure and the sagging pouches under his eyes.

Despite his 1,599 victories and the Dodgers’ World Series titles in 1981 and 1988, Lasorda was never considered a great innovator or tactician. But he had an unerring gut sense of how to manage players, and was, unquestionably, a great motivator. And through seven decades as a player, scout, coach, manager, interim general manager and advisor, he remained an unabashed cheerleader for the Dodgers.

“No one knows how good a manager he is — it’s an imprecise science — but he was good enough to get in four World Series and he was the best there ever was at taking a bunch of moderately talented kids out of the minor leagues and making them think they were the 1927 Yankees,” Times columnist Jim Murray wrote in 1990. “No one has yet been able to figure to this day how he got the 1988 team in the World Series, never mind winning it in five games.”

Thomas Charles Lasorda was born Sept. 22, 1927, in the Italian American section of Norristown, Pa., outside Philadelphia. The second of Carmella and Sabatino Lasorda’s five sons was pugnacious, but as much as he loved fighting, he loved baseball even more. Money was tight, though, and he had to work every summer. He took jobs as a bellhop and laid track for the Pennsylvania Railroad.

He was signed by the Phillies out of Norristown High before the 1945 season. He spent two years in the military and was chosen by the Dodgers in the 1948 minor league draft. Although he thrived in the minors, once recording 25 strikeouts in a Class C game, he couldn’t crack the Dodgers’ strong pitching staff. He made his major league debut on Aug. 5, 1954, appearing in four games that season and four the next season. His most noteworthy feat was tying a record by unleashing three wild pitches in a single inning.

He was purchased by the Athletics in March 1956 and pitched in the minors until 1960. Lasorda became a scout for the Dodgers in 1961, then in 1965 became a manager in the Dodgers’ minor league system. In Pocatello, Idaho, and Ogden, Utah, he sold tickets, took tickets and cooked team meals. He’d squirt opposing fans with water guns or stage fights, anything to ignite team spirit.

His antics were entertaining, but he backed them with good results and was promoted to manage at the triple-A level in Spokane, Wash., from 1969-71 and in Albuquerque in 1972. His teams won five pennants in seven seasons, and 75 players he managed made it to the major leagues.

By the time Lasorda wore a major league uniform again, this time as a coach, the Dodgers had long before left Brooklyn for Los Angeles. He became the third base coach in 1973 for Walter Alston, the club’s longtime manager.

Alston retired on Sept. 29, 1976, after Lasorda had rejected a number of offers from other teams to manage while waiting for Alston to step aside. Lasorda inherited a terrific infield of Steve Garvey at first base, Davey Lopes at second base, Bill Russell at shortstop and Ron Cey at third base. Lasorda had managed all four in the minors.

Lasorda’s personality ensured that the atmosphere around the Dodgers would be lively. The first thing he did in 1977 was move the manager’s office from the cubicle Alston had used to a larger room that could hold a TV set, couches and a postgame buffet. He invited players to drop in, sample the food and chat.

Fans loved the new, more colorful Dodgers. Home attendance surpassed 3 million for the first time in 1978 and peaked at 3.6 million in 1982, which was the club record until 2006. “Some managers are worth five games a year to their franchises. Sagacious moves can account for that much success. Tommy Lasorda is worth something more — a few hundred thousand in attendance,” Murray wrote in 1988...
https://www.latimes.com/obituaries/story/2021-01-08/dodgers-legendary-manager-tom-lasorda-dies-at-age-93-heart-attack