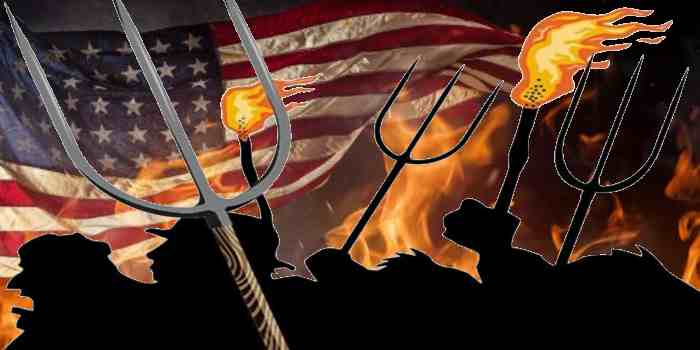 In general, revolutions and/or civil wars are planned, but all have an element of spontaneity. Some are easier to formulate than others, but our situation has many faces with many false flags, false allies, and roads to nowhere. It is difficult to know what is real and what is a ruse.

A civil war is when two factions fight against each other that may or may not be aimed at the government. A revolution is when a group demands an overthrow of the government in favor of forming a new system of government.

First of all, know this: Dictators or, in our case, the ruling class, are never as strong as they tell you they are, while people are never as weak as they think they are.

The Russian and French Revolutions had a lot of help, mostly from their respective monarchies that kept the people where they were, destitute and with little hope. You can live for weeks without food, several days without water, but mere seconds without hope. And what did the French and Russians get for all their suffering? The French got unending wars that devastated several generations of their men and the Russians got the same crap cake but with a different label on the package. And, of course, millions of dead Russians from starvation and political murders. The only suffering the Democrats could come up with had to be studiously manufactured.

In our case, we have a minority political party that has convinced a substantial segment of our nation that the Democrats are in the majority, when, in fact they are the minority. Otherwise, why would they have to go to such lengths to ‘win’ an election. The Left attempted two impeachments, both failed. With help from globalists and foreign enemies, they conjured up a pandemic, which, I believe, will eventually result in mass trials for crimes against humanity. They kept the country in fear, and destroyed the greatest economy, we had ever seen, at least in our lifetimes. The Democrats engaged in massive voter fraud, then continued the fight to stop voter ID, keep and expand ballot harvesting, and mail-in voting. They illegally imported millions of poor, uneducated, unvetted migrants and then illegally spread them throughout the country, trying to register them to vote, and now working to legalize 16 and 17-year old kids to vote, knowing they have been sufficiently indoctrinated.

The recent riots, the killings, the looting, the burning of cities, all had a purpose, a warning and a demonstration of what the Left is capable of. The DNC wants you to think we have a percolating wide-spread far-left revolution on our hands that they can’t hold back for much longer. Born of systemic racism, white supremacy, and a history of genocide of people of color…everything the Democrat Party historically stood for and fought to maintain, but now have magically put on the shoulders of the Republicans. They have managed to completely reverse history. This monster has been well-fed for years.