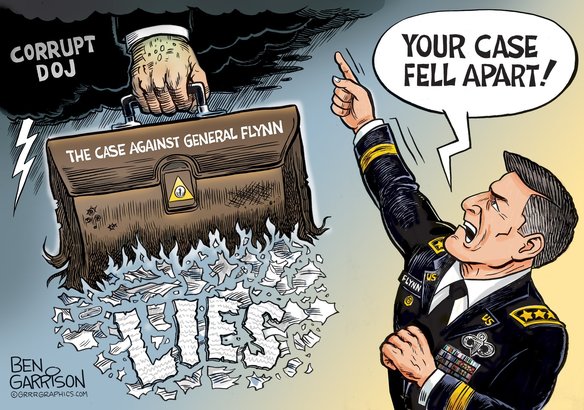 How would you like to be investigated by the FBI because you disagreed with the president’s policies? Sounds a little KGB-ish, you might think — and you’d be right, because the FBI has zero authority to conduct such an investigation. But the more we learn about the FBI’s investigation of Michael Flynn, the more it appears he was targeted precisely because, as the national security adviser to the incoming Trump administration, he signaled that the new administration might undo Obama administration policies — which is kind of what the American people voted for in 2016.

Some will say that Gen. Flynn was investigated for legitimate criminal or national security reasons. Yet, the FBI’s ultimate interview of Flynn addressed none of the grounds that the FBI used to open the original case against him. For those of us who have run FBI investigations, that is more than odd.

Heavily redacted FBI documents that have been released indicate Flynn was one of several Trump campaign members who merited their own subfile investigation under the larger, now infamous “Crossfire Hurricane” debacle. Flynn even got his own cool codename — “Crossfire Razor.” (No, the FBI isn’t usually that absurd. But absurdity colored that entire period of time.)

For the record, Flynn clearly exercised poor judgment as a result of being interviewed by the FBI. The larger question is whether the team under then-Director James Comey had a legitimate basis to conduct the interview at all.

FBI documents show that a Foreign Agent Registration Act (FARA) case was opened against Flynn. The stated reasons, in rank order, for initiating the investigation were that he was a member of the Trump campaign; he had “ties” to various Russian state-affiliated entities; he traveled to Russia; and he had a high-level top-secret clearance — for which, by the way, he was polygraphed regularly to determine if he was a spy.

None of the listed reasons is unusual activity for the kind of positions he held. Overall it is pretty thin justification for investigating an American citizen. Yet, most chillingly, the Crossfire Hurricane team stated it was investigating Flynn “specifically” because he was “an adviser to then Republican presidential candidate Donald J. Trump for foreign policy issues.”

Let me be clear: That is not a legitimate justification to investigate an American citizen.

There is a theme that runs through the entire Crossfire Hurricane disaster, which has been publicly articulated by Comey and his deputy director, Andrew McCabe: They saw themselves as stalwarts in the breach defending America from a presidential candidate who they believed was an agent of Russia.