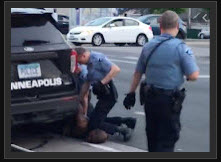 Over the past six months or so “We the People” have basically been rendered housebound courtesy of the nasty little virus from China. And in the case of Right Side Patriots being housebound it left us with lots of time to do what we do best…separating facts from fiction and then reported on truths the liberal media dare not tell us. And with our country currently in the throes of great unrest as rioting and mayhem grow more commonplace with each passing day, we had the time to not only reexamine what is ground zero of all this unrest…as in George Floyd…but to then layout the one truth the left fears above all else…the truth that Officer Derek Chauvin was not…we repeat…not…responsible for George Floyd’s death…George Floyd himself was the cause of his own death.

And all knew this almost since day one yet willfully and with malice intended set the stage and assembled the players for all that came next or should we say had everything in place just waiting for a touch point…a person…to set all in motion.

The images were stunning and unsettling…eight minutes caught on a passerby’s cell phone…eight minutes showing a black man laying prone face down in the street with his hands “cuffed” behind his back while a white officer’s knee ‘supposedly’ pressed hard into the man’s neck as the man kept repeating the words, “I can’t breathe.” And those eight minutes led to Officer Chauvin’s firing from the Minneapolis Police Department and his being charged with second-degree murder and second-degree manslaughter…all based upon a snippet of film played before the court of public opinion…a decision rendered before an official investigation had taken place and before an official autopsy and corresponding toxicology report had been completed, finalized, and signed off on.