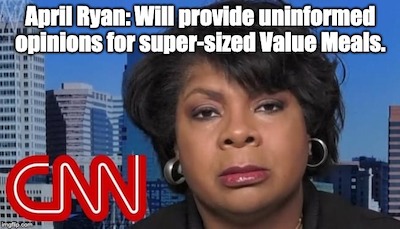 CNN political analyst April Ryan declared she “cannot wait” to see President Trump forcefully removed from the White House by police and armed forces if he loses his bid for reelection.

Ryan evoked a common liberal talking point Saturday by predicting that Trump would refuse to leave office if he loses the election.

“There’s going to be a split-screen on Jan. 20, 2021. If Joe Biden is now going to be the 46th president of the United States, you will have him being inaugurated and watching police and armed forces trying to pull Donald Trump out of the White House. I cannot wait for that split-screen,” Ryan said.