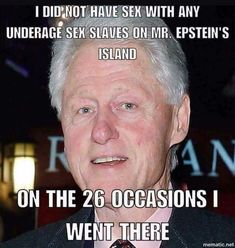 Did Bill Clinton’s longtime “body man”/key aide expose the former president as a liar about his activities with Jeffrey Epstein? Or is Doug Band using Vanity Fair’s Gabriel Sherman to exact revenge for getting squeezed out by Chelsea Clinton after a dispute over Band’s Teneo venture? Either way, it’s popcorn-passing time as Band declares what everyone had already assumed — Bill lied about never going to Epstein’s notorious sex-traffic island (via Twitchy):

By the fall of 2011, the rivalry had turned into a war of attrition. Band looked for an advantage anywhere he could find one. The Clintons’ ties to Jeffrey Epstein and Ghislaine Maxwell provided one. Band told me he had been trying to push Epstein out of Clinton’s orbit ever since their much-discussed 2002 trip to Africa aboard Epstein’s private 727, dubbed the “Lolita Express.” Band recalled that Epstein had made a bunch of ridiculous claims on the trip, like boasting that he invented the derivatives market. Band said he had no idea about Epstein’s sex crimes back then but got enough bad vibes that he advised Clinton to end the relationship. But Clinton continued to socialize with Epstein and take his money. In 2006 Epstein donated $25,000 to the Clinton Foundation. Clinton made more than two dozen trips on Epstein’s jet around this time, Epstein’s flight logs show. In January 2003, according to Band, Clinton visited Epstein’s private Caribbean island, Little St. James. Band said it was one of the few trips he declined to go on in his time with Clinton. A Clinton spokesperson said the president had never been to the island and provided detailed travelogue entries of the period in question that did not contain a visit.

Clinton and his team have ferociously denied ever visiting Epstein’s island. They have also attempted to downplay just how often that Bill rode the Lolita Express too, even after documentary evidence shows him as a passenger on dozens of trips. They have only acknowledged four occasions, all of which were supposedly in service of charitable efforts. However, there would be no good reason for Bill to have traveled to the island other than for his own recreation, and so they keep denying he was ever there — even while Virginia Roberts Giuffre insists she saw him on the island, albeit behaving himself at the precise moment.