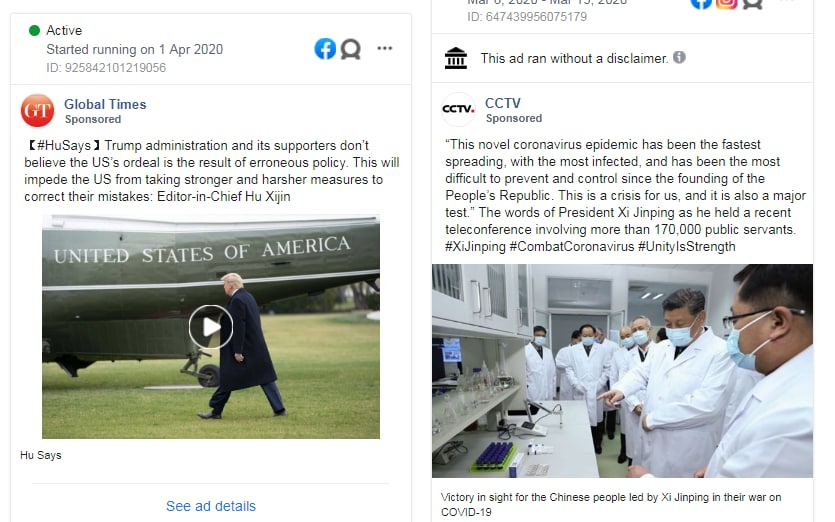 Chinese state media has been flooding Facebook and Instagram with undisclosed political ads blaming President Donald Trump for the Wuhan coronavirus. Facebook said in a statement that it was an “error” that the ads were not classified as political and is correcting them.

The Telegraph reports that Chinese state media has been posting undisclosed political ads to Facebook and Instagram in an attempt to downplay China’s role in the Wuhan coronavirus pandemic and blaming President Donald Trump. Three Chinese state media outlets, Xinhua, China Central Television, and the Global Times, have targeted ads towards users across the world in English, Chinese, and Arabic.

The ads have reportedly been seen millions of times and extol China’s efforts to fight the coronavirus while downplaying the countries domestic outbreak. The articles portray President Trump as misguided and racist and suggest that the virus may have originated in the United States. “[China] has taken stringent and forceful measures, and turned the tide on coronavirus,” said one ad. Another states: “Trump’s disruption to China has severe consequences.”

All of the ads initially ran without a political disclaimer which allowed them to hide information about who the ads were targeting and where they originated from. Several of the articles focused on President Trump’s use of the term “Chinese virus” to describe the coronavirus while others highlighted statements from Chinese president Xi Jinping.

The Telegraph reached out to Facebook about the ads, the social media network stated that it was an error that the ads were not classified as political and has since corrected the issue. A spokesperson also stated that many of the ads are running in countries where Facebook requires no disclosure making it difficult to determine how much more propaganda may have gone unnoticed on the site.