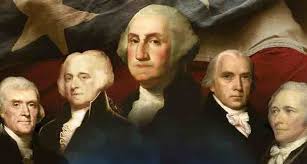 There are two kinds of people in this world – builders and destroyers. You know who you are.

Our forefathers were builders who rejected monarchy in favor of limited government and the challenge of self-rule. Our forefathers understood the difference between servitude and citizenship. They chose freedom and built a more perfect union – a government of the people, by the people, for the people. The building of the United States of America was the most successful experiment in individual freedom and prosperity the world has ever known.

Commandments 1-4 codify rules for membership in the group, they are the unifying principle of monotheism. Monotheism is at the heart of the Ten Commandments and its moral laws. Freedom and independence require self-respect, self-control, and respect for others. It is a delicate balance that requires maturity and the ability to agree to disagree.

Commandments 5-10 codify the ethos of individualism and respect for others: “Do unto others as you would have them do unto you.” The Constitution and the Commandments define the balance between self and society, and between the individual and the group. There is no disagreement about the need for mutuality or respect for the individual.

The humanitarian hoax of collectivism is the destruction of the individual. Socialism is the destructive democrat party platform being marketed as altruism. Radical blue state Democrat leaders are telling the citizens of their states that anarchy, looting, robbery, rape, murder, and mayhem perpetrated by destroyers will bring equality and social justice. It is a lie. Anarchy precedes tyranny.