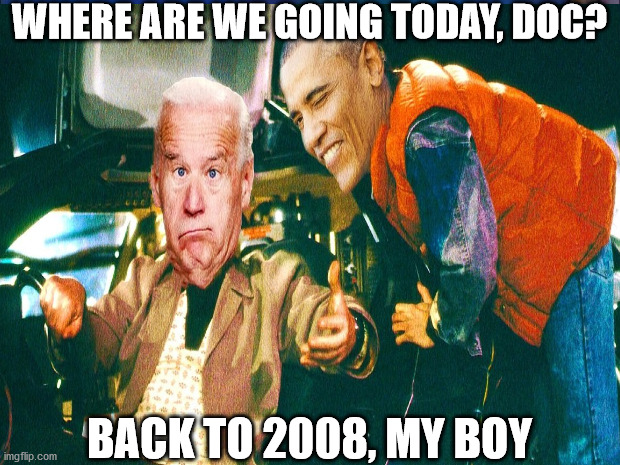 The 1980s movie “Back to The Future” is about to become our new reality.

This 2021 reboot from hell features Joe as “Doc,” and his administration as the DeLorean time machine, and together, they’re going to take the entire country back to 2008.

Buckle up America, we’re going back in time!

The United States is about to experience Barack Obama’s third presidential term on steroids.

Obama’s third term was scheduled to premier back in January, 2017. However, after being vaporized by a MAGA locomotive and soundly rejected by the American people, Obama slithered off into the shadows where he licked his wounds and plotted sweet revenge.

Boy oh boy, he got his revenge — tenfold — thanks to a well-orchestrated Russia hoax, months of civil unrest, and a perfectly-timed Chinese pandemic that demolished President Trump’s seemingly unstoppable economy.

In just four short years the 44th President of the United States settled the score with MAGA and became this nation’s 46th President by proxy.

Don’t believe me? Let me show how you slick Barry truly is.

A couple of months back I watched an Obama interview with late night lunatic Stephen Colbert. Obama was there to hawk his umpteenth autobiography, but things actually got interesting when he finally came clean about the Democrat’s 2020 game plan. He actually spilled the beans and revealed that he is the official Biden Handler™.

The truth came out while Obama shared his secret “fantasy” with Colbert — and no — thankfully, he wasn’t referring to his hulking wife, it was actually much scarier than that.

Here’s what he said:

“I used to say if I can make an arrangement where I had a stand-in or front-man or front-woman and they had an earpiece in and I was just in my basement in my sweats looking through the stuff and I could sort of deliver the lines while someone was doing all the talking and ceremony, I’d be fine with that because I found the work fascinating.” [Deadline]

And there you have it…the blueprint plan to rebuild Obama’s failed 8-year presidency – dug up from the bowels of globalist hell and unleashed upon the American middle-class for a third crummy time.