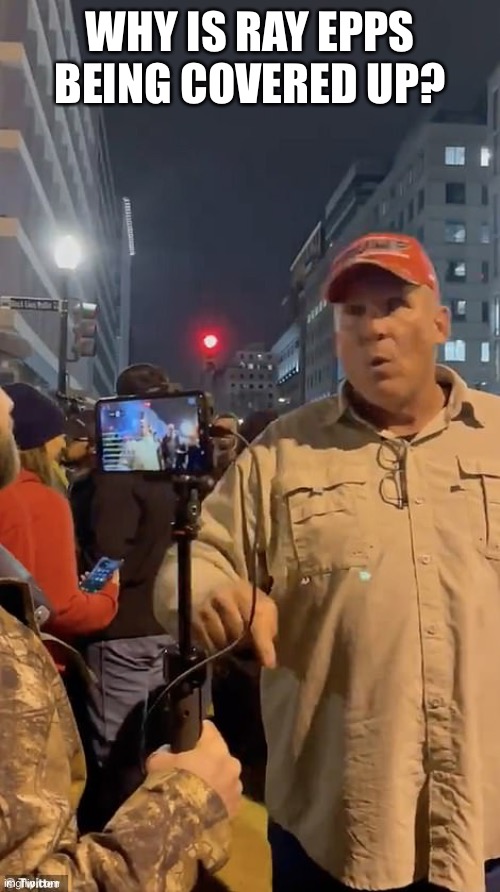 I’m a January 6th political prisoner being held in the DC-Gulag. My name is Sean McHugh. I’m being held in very inhumane conditions in the DOJ’s effort to try and make me plead guilty under duress. I believe they are trying to do this because I had direct contact as seen on video with Ray Epps, an individual who has been reported by multiple media sources to possibly have FBI connections and involvement for incitement. At the very least he appears to be a government cutout protected by a lawyer who was formally known as an employee of the FBI. In fact, the FBI has covered for him by scrubbing his name from the most wanted list for January 6th after real journalism exposed his identity.

I encountered Ray Epps, the real de facto leader of January 6th 2021, multiple times while in D.C. I had coincidental contact with Ray Epps throughout the day and people who appeared to be working in concert with Ray Epps. Other than Capitol Police attacking peaceful protesters without provocation or warning, Ray Epps was more responsible for the for initiating the events that happened at the Capitol than anyone else. He is seen on video January 5th encouraging other patriots to go inside the Capitol which is the very inception of the whole idea to actually go inside. However, he is still not indicted or spent one day in jail. I’m actually the one labeled as the de facto leader of January 6th by the government and Chief Judge Howell of the DC Circuit.

Here is a brief account of the morning of January 6th 2021. Some details are left out as I still face trial.

On the morning of January 6th my mother, friend, and I were walking down Constitution Avenue toward Ellipse Park. I was talking into my megaphone something about Joe Biden when I was waived down by who I now know as Ray Epps. We walked over to Ray Epps and associates who were wearing military colors. He was yelling, “We are marching over to the Capitol at 1:00pm whether Trump is done speaking or not and we are going inside.”

When we were close to Ray Epps he put his hand on my shoulder and said to me, “You have a bullhorn! You have a loud voice to get the word out!” Trying to place responsibility on me Ray Epps said, “You need to tell people the plans. At 1:00pm we are going inside the Capitol whether Trump is done speaking or not.” Ray Epps said, “We are leaving from here and we will walk that way to the Capitol and through the front door.” That was near the corner of what I believe is Constitution Avenue and Ellipse Park.

We continued on with our day at the Trump rally and as Trump was speaking, sure enough, a crowd was on its way down Constitution Avenue towards our nation’s Capitol Building. This was the beginning of a peaceful protest, or so I thought. At the Capitol Ray Epps was whispering in Ryan Samsel’s ear egging him on to take down the barricade as seen on video. I can tell you Ray Epps was inciting the crowd all day. Ray Epps was yelling to the crowd “Push forward” on the West Terrace. I heard Ray Epps on multiple occasions saying “We are going inside”, even after peaceful protesters were met with police force on the West Terrace.

Not once did my mother, my friend, or I pass the police line or continue into the Capitol Building that day. However I was attacked multiple times with rubber bullets and sprayed repeatedly directly in the face with various chemicals for speaking on my megaphone. My mother was also sprayed with multiple different chemicals in her face and shot with rubber bullets and pepper balls in her head for no reason. Capitol police were aiming for faces leaving multiple people’s faces riddled with holes bleeding profusely.

My friend was hit in the head with a concussion grenade and it went off severely injuring him and cracking one of his teeth without warning or any provocation. It was clear they wanted to severely injure people without any announced reason or any apparent provocation. I watched as Capitol Police beat unarmed women with batons. I watched a very petite woman pushed over by Capitol police onto a sharp leg of a barricade that was on its side purposely and unwarranted. They wanted to hurt the vulnerable and elderly. Everyone was asking “Why are you doing this?” They were out for blood!