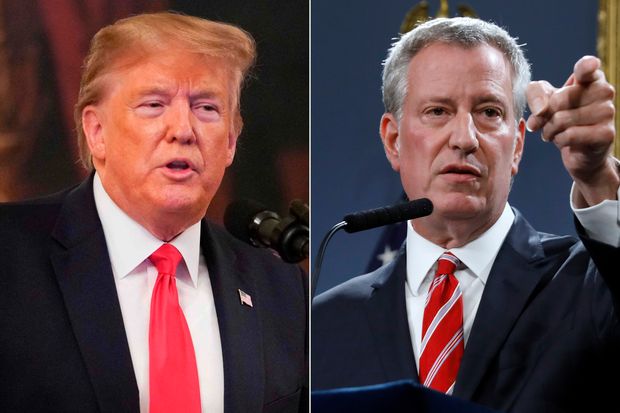 Mayor Bill de Blasio and Gov. Andrew Cuomo on Wednesday tried to blame President Trump and the federal government for the ongoing fiscal crisis in New York City while still refusing to reopen the city and let people get back to work.

The pair refuse to reopen small businesses in New York City despite the number of coronavirus deaths and hospitalizations hitting all-time lows this week.

On Tuesday, 55 people were hospitalized in the city. There were 74 deaths across the entire state. But the city remains closed until further notice with few details being released about how and when it will reopen.

Commercial landlords are not collecting rent from retail tenants which is triggering an 'alarming' drop in tax revenue that could deplete essential public services and residential tenants are breaking their leases to flee the Big Apple.

A chorus of small businesses have spoken out against de Blasio and Cuomo for holding them 'prisoner' by not allowing them to do business while Costco, Walmart and Home Depot, for example, have been able to throughout the pandemic. They plan to start reopening next week and say they are consulting a lawyer about their legal rights.

On Wednesday, de Blasio - who is still collecting more than $9,000 a month in rent from three properties in Park Slope on top of his $258,000 mayor's salary - said he would 'aggressively' shut them down.  He blamed the city's 'fiscal crisis' on Trump and complained that there was 'literally no timeline' on when he might see some financial help from the government.