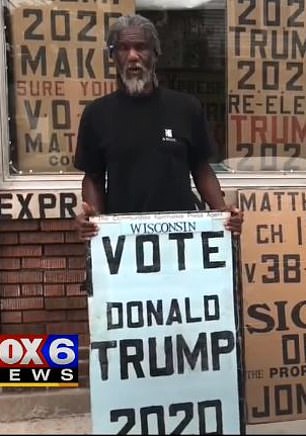 Bernell Trammell, 60, was gunned down in a drive-by shooting on Thursday in the middle of the day in Milwaukee, Wisconsin.

He was shot to death in front of his business, eXpressions Journal, which was covered in signs including those showing his support for President Donald Trump. He often held up his signs outside and walked around with them. He spent the past few weeks advocating for Trump’s re-election both in his neighborhood and in front of City Hall in downtown Milwaukee, talking with people who would listen.

Police are investigating if politics played a role in his shooting. According to Reggie Moore, director of Milwaukee’s Office of Violence Prevention, he had recently intervened between Trammell and a young man over a Trump sign he was carrying.

He was also shot near the spot where he’d just given an interview about his support for the president about three hours before that can be seen here.

They do not know yet if politics factored into it but they don’t have a lot of information yet and they aren’t discounting his GOP links.

According to the Daily Mail, members of the community described Trammell as a kind and loving man who wouldn’t hurt anyone, who was a “community figure” who was known for his positions and signs.