Just had a very nice meeting with Attorney General Bill Barr at the White House. Our relationship has been a very good one, he has done an outstanding job! As per letter, Bill will be leaving just before Christmas to spend the holidays with his family...

Who is Jeff Rosen? Here is what the DOJ Website says: 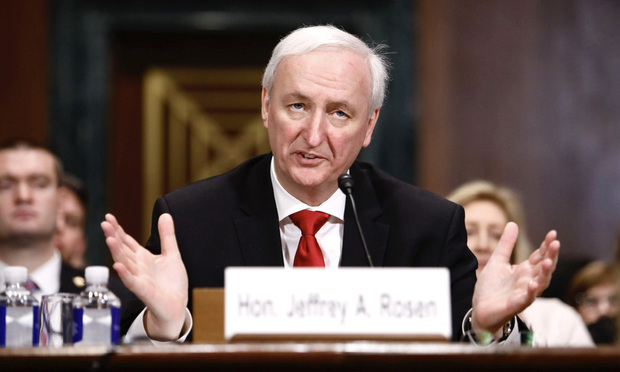 Jeffrey A. Rosen is the 38th Deputy Attorney General of the United States.  In this role, he acts as the Department of Justice’s Chief Operating Officer and advises and assists the Attorney General in leading the Department’s more than 110,000 employees.  President Trump announced his intent to nominate Mr. Rosen to this position on February 19, 2019, and the U.S. Senate confirmed the nomination on May 16, 2019.

As the Justice Department’s second-ranking official, Mr. Rosen oversees all of the Department’s components, including its law enforcement agencies, litigating divisions, ninety-four U.S. Attorney offices, and its management, policy and other staff offices.  Mr. Rosen maintains a strong focus on implementation of the Department’s key priorities, including protection of national security, protection of public safety by combatting violent crime and drugs, safeguarding civil rights and liberties, and maintaining the rule of law.

Mr. Rosen has guided numerous initiatives, including an antitrust review of online technology platforms, criminal and civil opioids enforcement and legislation, investigations and prosecutions of IP theft and of cyberhacking, counter-UAS measures to facilitate safe use of drones, redress of pandemic-related fraud, and reform of regulatory and administrative law, among others.  In February 2020 Mr. Rosen presented oral argument to the U.S. Supreme Court in a case involving prison inmate litigation (Lomax v. Ortiz-Marquez).

Though most of Mr. Rosen’s nearly four-decade career was in the private sector, he has almost a decade of public sector experience, including U.S. Senate confirmations on two previous occasions.  Prior to arriving at the Department of Justice, Mr. Rosen served as the Deputy Secretary of Transportation (2017-2019), where he was the Chief Operating Officer of a Cabinet Department with more than 55,000 employees and a budget in excess of $80 billion.  Other appointed public sector positions include General Counsel and Senior Policy Advisor for the White House Office of Management and Budget (2006-2009) and General Counsel at the U.S. Department of Transportation (2003-2006).  He was also an appointed Public Member of the Administrative Conference of the United States (2013-2017).

In the private sector, Mr. Rosen first joined the law firm of Kirkland & Ellis as an associate in 1982 and became a partner in 1988.  He was elected to that firm’s global management committee in 1999.  After his public-service appointments during 2003-2009, Mr. Rosen returned to Kirkland & Ellis LLP as a partner from 2009-2017.  Throughout his years in private practice, Mr. Rosen handled complex litigation across the United States, including jury trials, bench evidentiary hearings, arbitrations, and appellate arguments.  Among his wide-ranging litigation practice were cases involving antitrust, securities, RICO, business torts, trade secrets, contracts, government enforcement actions, and product liability, including class actions, as well as regulatory matters.

Mr. Rosen served as the Chair of the American Bar Association’s Section of Administrative Law and Regulatory Practice during 2015-2016.  In addition, he previously served as an adjunct professor at Georgetown University Law Center, where he taught Professional Responsibility and Legal Ethics.