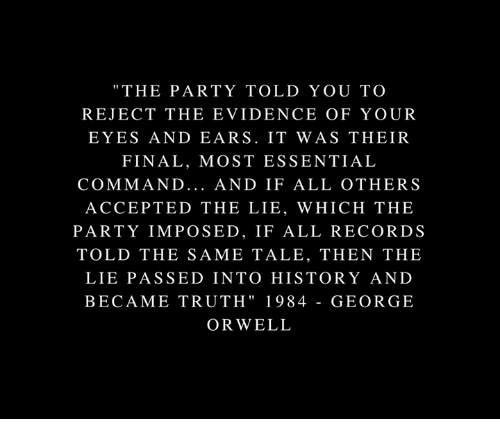 George Orwell wrote his prophetic masterpiece 1984 barely three years after Europe was liberated from the oppressive grip of Nazi socialism.  Victory notwithstanding, Orwell remained preoccupied with the ease and speed with which a nation's freedom could be lost.  Freedom's strength was also liberty's fragility — a free people could choose to relinquish freedom.  This poignant lesson was Orwell's wake-up call that the great draconian nightmare hadn't ended — it was merely postponed.

This existential threat must have terrified Orwell so deeply that he envisioned the resurgence of a tyrannical society a mere 36 years after the blitzkrieg of World War II.  Even with today's 2020 hindsight, one wonders how he could have so accurately predicted the impending demise of civilization.  His only miscalculation was the appointed year.  Nineteen eighty-four came and went without fanfare despite the chilling effects of a "cold war," a term Orwell coined to describe his "peace that is no peace."  His timing may well have proven accurate were it not for one unknown unknown in Orwell's visionary acumen: Ronald Reagan.

Now, 36 years after 1984's forecast, 2020 offers itself as an eerie time portal — a way back to the future of Orwell's prophetic world of freedom lost.

Much like today, Orwell's world of 1984 was divided into three warring superstates: Oceania, which included Great Britain and the Americas; Eurasia, controlled by Russia; and Eastasia, dominated by China.  Oceania, a totalitarian regime founded from an anti-capitalist revolution, was ruled by the Party under Big Brother's leadership and enforced by the Thought Police (Thinkpol), which served as judge and jury for offenses against Party doctrine. Nonconformists were broken until they finally surrendered under their own free will.  As Orwell wrote: "We do not destroy the heretic ... we capture his inner mind, we reshape him."  Today, this psychological oppression and censorship is carried out by "cancel culture" agitators and platforms like Google, Facebook, and Twitter, which suppress all opposing viewpoints — mostly recently a New York Post story on the Bidens.