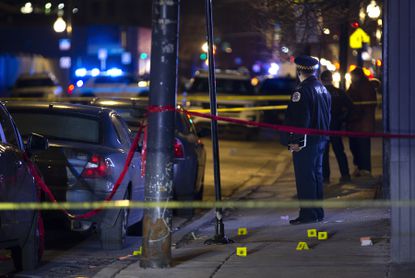 Heather Mac Donald has the grim details at the Wall Street Journal this week. While anecdotal evidence we’ve been covering here for the past ten months certainly suggested it, the final numbers are in. 2020 saw the largest percentage increase in homicides since accurate records have been kept on these statistics. And the lion’s share of the killings took the form of drive-by shootings. Also of note is the fact that the large majority of the victims were Black. If you ask most of the largely Democratic mayors of the large or medium-size cities where the killings were most prevalent (or most of the mainstream media), they’ll tell you that this surge was driven by the pandemic. But as Mac Donald notes, the data doesn’t back that up. (Subscription required)

The year 2020 likely saw the largest percentage increase in homicides in American history. Murder was up nearly 37% in a sample of 57 large and medium-size cities. Based on preliminary estimates, at least 2,000 more Americans, most of them black, were killed in 2020 than in 2019. Mainstream media and many politicians claim the pandemic caused this bloodbath, but the chronology doesn’t support that assertion. And now the criminal-justice policies supported by President Biden promise to exacerbate the current crime wave, while ignoring its actual causes.

The local murder increases in 2020 were startling: 95% in Milwaukee, 78% in Louisville, Ky., 74% in Seattle, 72% in Minneapolis, 62% in New Orleans, and 58% in Atlanta, according to data compiled by crime analyst Jeff Asher. Dozens of children, overwhelmingly black, were killed in drive-by shootings. They were slain in their beds, living rooms and strollers. They were struck down at barbecues, in their yards, in malls, in their parents’ cars, and at birthday parties. Fifty-five children were killed in Chicago in 2020, 17 in St. Louis, and 11 in Philadelphia. In South Los Angeles alone, 40 children were shot, some non-lethally, through September.

The reason the pandemic excuse doesn’t pan out is obvious. In the first months of the lockdowns and other pandemic restrictions, murders (along with almost all other types of crime) were actually down. When did the spike really begin? Look at Chicago for one key indicator. On May 31st, the Windy City recorded 18 murders, the most in a single day since the 1960s. Some of you will likely recall what else was going on at that time. George Floyd died on May 25th and that’s when the protests and riots began. The three cities with the largest spikes in homicide are Milwaukee, Louisville, and Seattle. Do I really need to fill in the blanks for you on this?