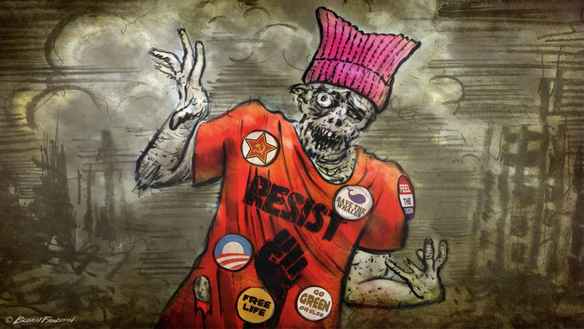 How to deal with the walking dead who infest DC and cities across the country? Stay positive. Stay focused. Take heart. Use the brains God gave you, in dealing with those who have none.

Despite the chaos in our streets, this is still the America we know and love. It represents everything the anarchists and race-baiters despise: freedom under the law, rights and responsibilities, and color-blind justice. Colin Kaepernick kneels during the Pledge of Allegiance because he rejects America. We stand because we respect it.

In 1776, John Adams said that in the future, the 4th of July would be “solemnized with pomp and parades, with shows, games, sports, guns, bells, bonfires and illuminations.” On the first Independence Day, our future as a nation was very much in doubt. During the Constitutional Convention, when asked what type of government he and his fellow delegates had given the new nation, Benjamin Franklin replied: “A republic, if you can keep it.” Each generation must ask itself that question – Can we keep it? The 4th is the time to re-affirm our faith in self-government. It’s also a time to celebrate not just our independence but our entire history.

[3] Thank a Cop for Being There for You and Your Family.

In the course of the mob actions and anarchist riots that have swept the country, cops (who have been specifically targeted by the mob) have been assaulted, shot, stabbed, and run over with cars. It’s a tough, dangerous, often thankless job. In New York City, the average starting salary for police officers is $42,500. The police are overwhelmingly outnumbered. There’s one cop for every 496 people in this country. Without respect for the men and women in blue, all will be lost. Help to re-affirm the reality that the average cop is honorable and decent. Let them know that there are citizens like you who stand behind them.

The Founding Fathers put the Second Amendment in the Constitution for a reason. It comes right after freedom of speech and religion. That’s how important they considered it. SCOTUS even acknowledged that it guarantees an individual, not a group, right. The store owners who defended their property from looters didn’t use feather dusters. The next time Beto O’Rourke says, “Hell yes, we’ll take your AR-15.” tell him to disarm Antifa first, as proof of his sincerity.

Understand why America is exceptional, why our system of government has served as a model for emerging nations, our economy has lifted boats around the world, and our defense of liberty has kept the world from slipping into the dark night of tyranny. There are many good books you can turn to for enlightenment and inspiration. I recommend starting with “A History of the American People,” by Paul Johnson.