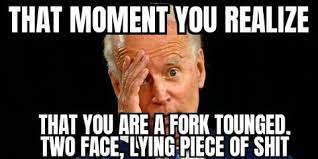 Why Biden Lies About Police? An old adage goes like this. “Better is the silent man who may prove himself foolish, than the one who opens his mouth and removes all doubt.”

No one can ever say they’ve ever had any doubts about the current President of the United States.

He is patently dishonest. But people explain that away as just being the old uncle at the family gathering who can’t help but exaggerate the good ole’ days.

He frequently relays abjectly false information. But supporters just blame his age, obvious stage of being diminished, or point to his past when a far more moderate man served in the US Senate. They also never admit that his younger, more able-bodied self always had the same problem.

He repeats the false dishonesties with perfection. Obviously, a believer in the theory of repeating a dishonesty enough times people may begin to assert it and believe it themselves.

It’s my observation—and anyone else’s with a brain—that he traffics in these habits with such expertise and frequency that he himself can no longer distinguish between facts and fiction.

But at least he never tweets mean things. Right?  Nope.

He just includes them in major pronouncements about our most valuable citizens—800,000 uniformed men and women in blue.

He slanders those who wake up every day committed to protecting us, even if it means they never come home that night & never kiss their children goodnight ever again.

On Saturday Sack of sh*t Biden released a statement supposedly honoring law enforcement as an observation of Police Week. Nice of him to squeeze it in since the rest of the nation had been observing it for the previous six days. Nonetheless, in the eleventh hour (of the seventh day) he began his statement by “praising” police.

"As we recognize Peace Officers Memorial Day and Police Week, we honor those who lost their lives in the line of duty and thank them on behalf of this grateful Nation for their service.”

After appointing a Vice (piece of sh*t) President who campaigned and donated for people to help rioters make bail during the summer of 2020, I guess we should be grateful that he said it.

But he couldn’t stop himself.

And he still wasn’t quite finished.

"These deaths have resulted in a profound fear, trauma, pain, and exhaustion for many Black and brown Americans, and the resulting breakdown in trust between law enforcement and the communities they have sworn to protect and serve ultimately makes officers’ jobs harder and more dangerous as well. In order to rebuild that trust, our State, local, and Federal Government and law enforcement agencies must protect constitutional rights, ensure accountability for misconduct, and embrace policing that reflects community values and ensures community safety. These approaches benefit those who wear the badge and those who count on their protection."

Never mind that for the last several decades, police kill very few unarmed citizens, to begin with. (On average less than 100 persons, in a nation of 300 million residents.) Never mind that among those averages every year for nearly the last decade police have killed close to double the number of white people as they have combined people of color. And also never mind that black men commit roughly 55% of the violent gun crime in the nation while making up roughly 6-8% of the population.

In order to believe Biden’s statement, you also must believe a few other assertions.

You must believe that communities of color are unimportant to police organizations—even though they live in the very neighborhoods that most rely on them for day-to-day order.

You must believe that police organizations are still primarily and dominantly white—regardless of the fact that the majority of the twenty largest cities are minority dominant in their demographic make-up or are approaching racial parity.

You must also believe that such shootings by police are never justified despite the repeated lawful instructions that are almost universally ignored, weapons that are pulled or attempted to be used, or lives that are saved in the process. It’s one thing for a senile bat to forget what state he’s in, day of the week it is, or to forget to close his secret Venmo account before taking the job.

It’s another thing to continually and purposefully use his diminished capacity to send the message that you stand with criminals more firmly than the men and women—increasingly majority people of color—who put on the uniform.

Yet regardless of his motivation—to carry water with the avowed racists of Black Lives Matter and other such ilk—he must be confronted and be held accountable for his reckless words that would endanger every American—red, yellow, black, and white.

There’s also another adage that’s worth a reminder.

“If you can’t find something nice to say, far better to say nothing at all.”

So, what will it be Mr. (piece of sh*t) President — will you continue being a piece of sh*t or praise the men and women in blue?