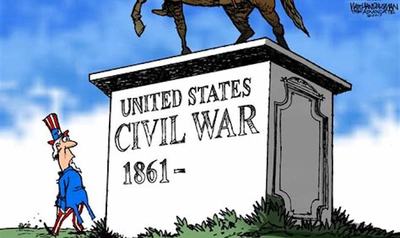 The Democrat Party has once again declared war on America! This Is No Longer Politics

Shocking! The rapid descent of our nation’s prestige, and the disintegration of the government’s relationship with its people, in just the last nine months is shocking! This cannot possibly be mere politics, a minor difference of opinion. This is no longer political theater, it is no longer apparent. It has become obvious, this is much more.

The Democrat Party has once again declared war on America.

Their loss in 1865 must have rung their guts and left them to putrefy. The Democrat Party has fallen into insurrection. They no longer desire separation. They now demand complete control, aligning themselves with a demonic globalist movement. Employing foreign assistance, they have engaged in biological warfare, cyberwarfare, a psychological operation (PSYOP) of such magnitude as to involve every institution, every facet of our country and our lives. They have degraded our political system, our Constitution and the law, our economy, our culture, health care, the election system, immigration, the media, judicial and military institutions, energy, the food supply, education from K through college and beyond, big and small business, big and small tech. Crime is growing in many Democrat cities by 40-50%. Nothing has been spared or left untouched. Our people suffer, our great middle class assaulted, pushed to the limit, while the Left pushes on… choosing oblivion amid chaos.

The fall has been so abrupt and so all-inclusive, it couldn’t possibly be mere incompetence. We went from being a proud country, a dominant military force our enemies feared, an independent economic powerhouse, a fully employed workforce, a country on its way to full restoration as the world’s protector of freedom and liberty, the greatest nation ever conceived by mankind, blessed of God, to a country in total disarray, being squeezed, by design.

Gas prices have doubled since Democrats saw it was not in our best interest to be energy independent. Two million unvetted migrants have entered our country, 20% with disease. As many as 73 cargo ships sit anchored off Los Angeles and Long beach (half of all imports) waiting to be unloaded when there is little means to either unload the ships or move the cargo. Ports in New Jersey and New York, as well as in Texas and Georgia, have seen record pileups. Inflation is now embedded in our economy. Store shelves look either sparse or empty. Restaurants are either closed or have cut days and hours. Lockdowns have affected small business while big business (large Democrat contributors) remain untouched.

The Democrats have lied to the American people! The COVID vaccines, it’s always the vaccines; they’re still being pushed hard by mandates despite thousands of vaccine deaths the government and the media have chosen to ignore and black out. As much as 30% of our workforce is in the process of being side-lined because of vaccination status. Doctors and nurses are being fired, airline pilots and flight attendants are being dismissed or not showing up for work, causing thousands of canceled flights. There are rumors that vaccinated pilots and flight attendants are dying, some in midflight. Air traffic controllers are walking out. Eminent doctors like Dr. Peter McCullough, the most cited physician on COVID-19 in the world, Dr. Robert Malone, the inventor of mRNA vaccines, Dr. Luke Montagnier, Nobel prize winner for finding the HIV virus, refuse to play along with the government narrative, are attempting to be heard. They warn us of the dangers these vaccines present. They are routinely being silenced. Yet their voices ARE being heard despite Big Tech pulling their plugs. The more the government pushes, the more suspicious people get as to the efficacy of these chemical bombs.

It has become apparent that these vaccines were developed to kill older, along with more vulnerable people, and sterilize women and young girls, a massive eugenics experiment…crimes against humanity.

School board meetings are becoming battlefields with parents being arrested for speaking out against masks, CRT, indoctrination, and sexual promiscuity in the schools. While public school students continue to fall behind, teacher’s unions show little concern. There is a growing movement by parents to remove their children from the public school system altogether, a half million so far.

Does any of this remotely sound like a government looking out for its citizens’ best interest?

Their goal was a coup d’état, joining a worldwide takeover with their demonic globalist friends to transform this nation into a commu/fascist, socialist country, turning every institution against its people. America remains their number one ambition. If they get America, they get the world!

Now they think Americans will yell uncle in short order. Wrong! I see Americans standing up for themselves and their country, pushing back. They are finding their courage. They will not be intimidated. They will not be moved. After Pearl Harbor, Admiral Yamamoto said what Democrats should be contemplating right now, “I think all we have done is to awaken a sleeping giant and fill him with a terrible resolve.” This is no longer politics.