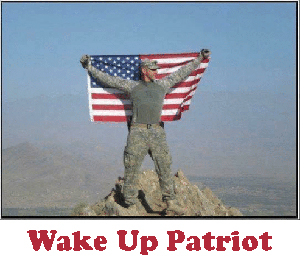 You sheep out there, go back to sleep. But all you Patriots, wake up. We have work to do!

The time has come to be brutally honest about our country, what is going on, and hopefully waking up America and getting them to Stand Up.

The people at home are the ones that are not too smart. When they finally relent and go for an job interview they will be asked why they have a 2 year gap in their employment. This fabricated worker shortage is to justify their illegal immigration push, to create new Democrat voters, raise the minimum wage, put many small businesses out on the street, and make big business happy. There is also a move to send a fourth stimulus check with talk of a guaranteed income. They want to vastly increase entitlements. It may sound nice to the ignorant, the uneducated, but to everyone else, it means slavery. When Biden said, “The Republicans will put you back in chains” remember, Democrats always accuse the opposition of what they intend to do. Democrats always find a way to get what they want. They scream democracy, democracy, but they will have none of it.

The gas crisis in the Southeast came out of nowhere. It’s no mystery that Democrats want America off fossil fuels, ready or not. They were not impressed with Trump’s energy independence and even our ability to export energy. The Democrats said they did not want the XL Pipeline because of ‘environmental and safety’ concerns.

To show how criminally psychotic they are, the energy secretary was asked why they didn’t use trucks or rail to transport fuel to where it was needed. Her response was that using a pipeline is safer. What? You can’t make this up. I detect a sick element of satisfaction as they watch the proletariat on mile long gas lines. That will teach them to buy an electric car. Since they are blaming Russia for the hack, I am even more suspicious.

Democrats as a whole are anti-Israel. The attacks on Israel by Hamas are being orchestrated by Iran, even while the Left wants Biden to lift the sanctions against the terrorist state. Much of Hamas’ money, is furnished to them by the United States through the money given to the Palestinian Authority and then funneled to Hamas. Instead of infrastructure, schools, hospitals and raising the standard of living for their people, they buy rockets, and war. Neither Hamas nor Iran believe that Biden will back Israel. So, war is here.

Biden has been handing out blessings from Hell. He has rewarded the Left with everything they could have hoped for. Of course, that’s if he knows what he’s doing or is even making the decisions.

The Democrat party has been taken over by far left Progressives, and Marxist socialists. Their goal is to sellout, and dismantle America to a point where the majority of Americans will cry out for more government control. They will gladly give it to the imbecilic like they have never experienced…comes The United Socialist States of America (soon to be attached to a One-World government). Except for Biden, you are not witnessing incompetence. You are watching a coordinated assault on the most powerful nation on earth with the intent to bring it low from enemies both foreign and domestic. Biden is a pawn, the fool.

What a difference a presidency makes. Even with COVID, just months ago, our country (and the world) was stable, coping with a minor pandemic better than any other country. The only instability came from Blue states, with their over-reaction and politicizing of every problem. As it turned out, 2017 - 2019 will be remembered as the new Camelot, the new Era of America. A time when we had a president of the people, by the people, and for the people. We’ll look at 2020 as a full-on assault on the New Camelot, and the American people. At present, the entire world is off kilter now that Trump is out of office. But, at least we don’t have a president sending mean tweets.

You sheep out there, go back to sleep. But all you Patriots, wake up. We have work to do!