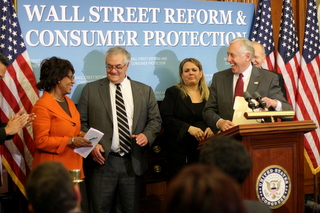 The big debate in Washington is how to fix Wall Street. Wall Street’s greed caused the financial collapse. Wall Street earns too much money. Wall Street is the root of the problem in “haves” and “have-nots”.

H.R. 4173, Wall Street Reform and Consumer Protection Act of 2009 is bill that the House Committee on Financial Services has written to fix the problems with Wall Street. The bill’s intention will be to avoid another financial meltdown. The Chairman of this committee is Congressman Barney Frank.

The highlights of the bill are as followed:

1) Consumer Protections: A new consumer protection agency, CFPA, to protect Americans from Wall Street. The sounds good, but the idea of Wall Street is based on speculating. No bill can protect the consumer from loosing money on a bad speculation. However, this new agency, CFPA, will create more deficit spending, increase the national debt and reduce America’s ability to compete.