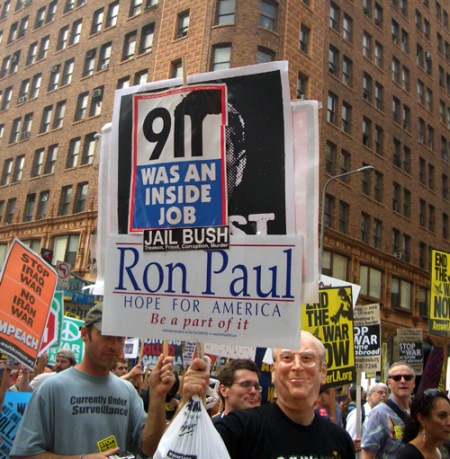 This post consists of a series of responses I posted to Jack Hunter's OPINION piece in the Daily Caller regarding Ron Paul's foreign policy. The piece is full of inaccuracies, fabrications, and paranoia. I countered Mr. Hunter on points of defense spending, and the attempt by the Ron Paul movement to redefine Conservatism into something that resembles anti-war Libertarianism.

First of all, the concept of limited government does not belong to Ron Paul. Conservative Republicans have always embraced the limitations placed on the government via Constitutional principles. The Ron Paul movement is deceptive and people need to pay attention to what is underneath those superficial layers of constitutionalism and smaller government and federalism. Ron Paul and his followers have a deep contempt for the United States Military. They call us "murderous," "conquerors," "terrorists," and "nation builders." Their defining belief is that it is our foreign "interventionism" in Middle Eastern countries that brought about the attacks of 9/11. Ron Paul himself has intimated that 9/11 was an inside job, and that the Bush Administration was "gleeful" that it occurred. Paul has accused Michele Bachmann of "hating Muslims." His refusal to consider the defense of Israel an important foreign policy matter smacks of Antisemitism. His followers accuse the United States of targeting Arabs, of murdering millions of civilians in unjust wars, and of an ineptness that makes the rest of the world hate us. Ron Paul also appeals to young, anti-war, legalize marijuana Occupy Wall Street types. The recent hysteria from his camp about the Defense Authorization Bill had him and his followers teaming up with the ACLU, Democrats in Congress, and citing the Huffington Post as a credible news source. It all looks suspiciously like an infiltration by the Left into the Conservative wing of American politics. Many Ron Paul supporters lack the basic Patriotism and love for country that defines Tea Party Conservatives. I have compiled comments from several Ron Paul supporters regarding our military actions overseas. They are truly shocking and can be read at http://reagangirl.com/?p=23633

Please refer to the following visual from the conservative Heritage Foundation to see that our defense spending in not "unlimited." http://www.heritage.org/budgetchartbook/defense-entitlement-spending. The reality that the total defense budget is only about 1/5 of the entire federal budget. Hardly unlimited. Mr. Hunter is not a reporter, but a hack who incites hysteria through his use of hyperbole and inflammatory rhetoric. Call it "isolationism," call it "non-interventionism," a pig with lipstick is still a pig. Ron Paul's foreign policies are naive, ill-informed, and extremely dangerous. You cannot simply ignore an ideology which represents an existential threat to Israel and the United States. Pulling out of foreign wars will not make Islamic Terrorists go away, it will invite more of them here. Mr. Hunter's statistics regarding the opinions of veterans are fallacious. But the Ron Paul movement has adopted strategies that used to be exclusive to the Left. Calling our Military "murderous," and "nation builders," lying about issues, fabricating information, and making the Ron Paul movement look as if it is larger than it is in actuality through a concerted and obsessive strategy of overwhelming polls and concentrating their numbers in places like Iowa. Watch out for this movement. It is deceptive and dangerous.

Ron Paul and his followers are trying to redefine Conservatism into something that resembles the anti-war, pro-marijuana protesters of the 60s and 70s. Ron Paul is a Libertarian who adopted the Republican label simply to gain traction in his campaign, so don't tell me he is a principled man. He holds fast to Libertarianism. Conservatism holds many Libertarian viewpoints such as a constitutionally limited government, Federalism, individual liberty, etc. But Conservatism is strengthened by the component of morality. We do not believe that government should legislate virtue at the national level, but we do believe that government, especially state and local government, has a role in protecting its citizens from the greater evils of the world. Conservatives believe that the government should protect the helpless, such as the unborn and the disabled. Conservatives believe that the law should exemplify virtue through placing limitations on harmful influences such as pornography and drugs. Libertarians tend to eschew the moral boundaries that Conservatives believe are essential to a healthy and free society. Ron Paul appeals to young anti-war, pro marijuana Occupy Wall Street types because they feel comfortable with an ideology which omits moral restraints. They have replaced traditional morality with their "anti-war" morality which defines any act of aggression (or self-defense for that matter) on the part of the United States as "immoral." It is time for thinking Conservatives to step back from the deceptive Ron Paul phenomenon and remember that it is reason, morality, patriotism, and a strong national defense that makes us a great nation.

Core Conservatives need to pay heed to the nature and purpose of the Ron Paul phenomenon. Their positions are often contrary to those principles and qualities we hold dear as Conservatives, especially the portrayal by some Ron Paul supporters of our Military as "murderous," "conquerors," and "terrorists."