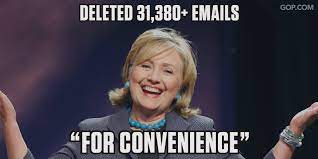 “Has the Secret Service become a national security threat?” Ja’han Jones of MSNBC recently asked. He refers, of course, to the “scandal” surrounding missing or deleted texts of Secret Service agents sent on January 6 as the incursion into the Capitol unfolded.

Of course, the scandal really began when anonymous Secret Service agents made the mistake of embarrassing the House’s January 6 tribunal by contradicting the outlandish hearsay account of Cassidy Hutchinson. Hutchinson’s story riveted Trump-hating viewers. But the committee had rushed to promote her testimony without first checking with any of the people who were actually present. Naturally, with egg on their faces, the committee launched a revenge campaign against the agency assigned with protecting the president. It demanded texts and its media allies declared routine deletions to be a cover-up.

Ja’han Jones practically said the quiet part out loud: In the “get Trump” era, contradicting anti-Trump an narrative constitutes the highest of all crimes against the re-defined “national security” of the oligarchtical uniparty that really runs things.

But there is something oddly familiar about this deleted text scandal. As so often is the case, the fake outrage over the deleted Secret Service texts has a much more serious analogue that was received very differently because the shoe was on the other foot. In the get-Trump era, government insiders intentionally deleted texts to cover-up a very real attempt to overthrow a duly elected president.

Shortly after the 2016 election, Democratic members of Congress demanded an investigation into the FBI handling of the investigation into former Secretary of State Hillary Clinton. According to the 2018 inspector general report, Democrats were angry because the New York field office of the FBI acquired a laptop jointly used by former U.S. Representative Anthony Weiner (D-N.Y.) and his then-wife, Huma Abedin. In addition to the evidence of Weiner’s sexual predation, agents also discovered a vast cache of emails between Abedin and Hillary Clinton—the existence of which appeared to contradict official FBI narrative that Clinton’s emails had all been accounted for. Many Clinton supporters still believe that then-FBI Director James Comey cost Clinton the election by publicly disclosing the existence of the new emails just days before the election. Thus, the Democrats demanded an internal review into whether the FBI agents investigating Clinton might have harbored political bias.