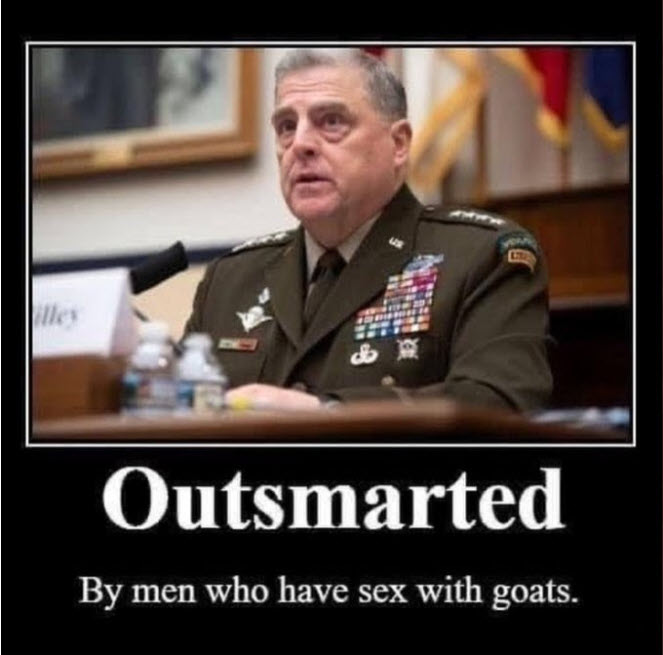 Rip those stars off your pathetic nostalgia costumes and resign. Quit. Tell that crusty Pinocchio in the White House and the faculty lounge Geppettos tugging his strings that you will have no more to do with his human centipede of failure in Kabul.

It’s not hard – your stars are right there, generals, right on the shoulders of those new uniforms you decided to adopt with the express purpose of evoking World War II and the memory of victory over a modern, peer-competitor military. Maybe, you thought, wearing winner’s gear would ease the pain of getting creamed by a bunch of Seventh Century throwbacks.

Yeah, we know your boss is a senile old fool with delusions of competence. His failure will be addressed at the ballot box. But your failure, generals and admirals, is something only you can address, at least until President DeSantis comes and separates the wheat from the chaff in the Pentagon.

Yeah, we know, you have to follow the orders of the civilian authorities – though not if it’s Trump, since he was not part of the in-crowd you aspired to join as adjunct military members. Your passive-aggressive mutiny against the guy the American people elected set back civil-military relations 250 years. You took the one institution most Americans still trusted and turned it into a roiling cauldron of hot garbage. And don’t try to hide behind “You gotta support the troops.” We do. But you suck, and we know you suck, and you know you suck.

If you didn’t suck, you’d have quit. When President Durwood told you to ditch Bagram Air Base, you joint chiefs should have got together, realized this was going to get a bunch of the guys that America entrusted to you killed, and decided to resign. You can’t disobey, but you can take a stand.

Well, you did take a kind of stand. You just stood there. As one sergeant major told me today, the newest second lieutenant would identify this op as a disaster in the making. Now, far be it from me to contradict an E9, but I expect he would agree that even the greenest Girl Scout recruit would ask, “What the unholy hell are you idiots thinking, pulling the military out and giving up our secure airbase before you’ve completed your noncombatant evacuation operation?”

You could have quit. You could have salvaged some shred of honor after your years of total failure, but making a stand would come at the expense of your careers.