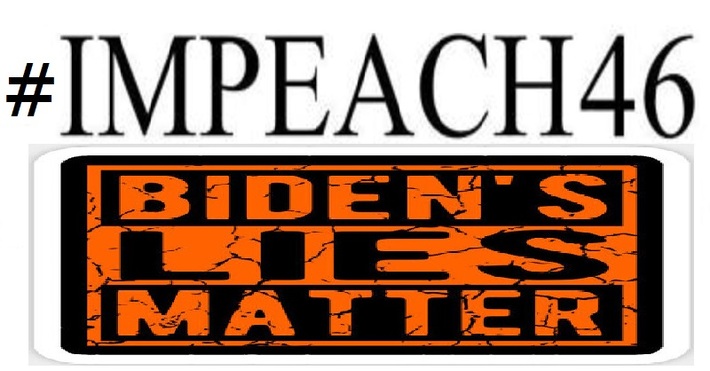 The weakling Republican Party needs to get some cojones and step up now to prepare for the impeachment of Joseph Robinette (yes, that is his middle name) Biden.

The GOP should make the clear case for impeachment a central piece of their congressional election plan for 2022. We already have a House resolution; now we need a sizable majority in the House of Representatives and Senate to convict and remove him. The time is ripe. The need is urgent.

If the weak-kneed Republican leadership will not do it, they should be replaced. The Paul Ryanesque House Leader Kevin McCarthy (R-Calif.) is certainly not up to the job, never defended Trump, and has so many skeletons in his closet—from rumored extra-marital affairs to bunking with turncoat RINO pollster, Frank Luntz—that he is an unacceptable Speaker of the House come 2022. Replace him now with someone like Steve Scalise (R-La.), who has a backbone, has taken one for the team, and is a patriot and populist of the first order. Why wait? He would impeach Biden.

On the Senate side, Mitch McConnell (R-Ky.), of cocaine fame, has literally been in bed with the Chinese for years and is precisely the kind of Grand Old Establishment Republican who stands in the way of draining the swamp. He personifies that cesspool of K Street interest group politics, lobbying, and patronage. If he won’t step down, replace him, too. Senator Tom Cotton (R-Ark.) would be a good choice and is a reliable conservative.

The resolution to impeach sets forth an article of impeachment stating, in his former role as vice president, and now as president, Biden abused the power of that office through enabling bribery and other high crimes and misdemeanors by allowing his son, Hunter Biden, to influence the domestic policy of a foreign nation and accept benefits from foreign nationals in exchange for favors.

The article states that, by such conduct, Biden

The article also states that this conduct warrants immediate impeachment, trial, and removal from office and disqualification to hold and enjoy any office of honor, trust, or profit under the United States.