Documents that Georgia's largest county submitted to state officials as part of a post-election audit highlight significant irregularities in the Atlanta area during last November's voting, ranging from identical vote tallies repeated multiple times to large batches of absentee ballots that appear to be missing from the official ballot-scanning records.

The problems in predominantly Democratic Fulton County potentially impact thousands of ballots in a presidential race that Joe Biden was certified as winning statewide by fewer than 12,000 votes.

The memos reviewed by Just the News include the handwritten tally sheets for all absentee ballots counted by the county as well as a private report from a contractor hired by Secretary of State Brad Raffensperger to monitor the Atlanta-area election process. The report, which chronicled seven days of problems, recorded troubling behavior like the mysterious removal of a suitcase of sensitive election data known as polls pads, used to authenticate voters. 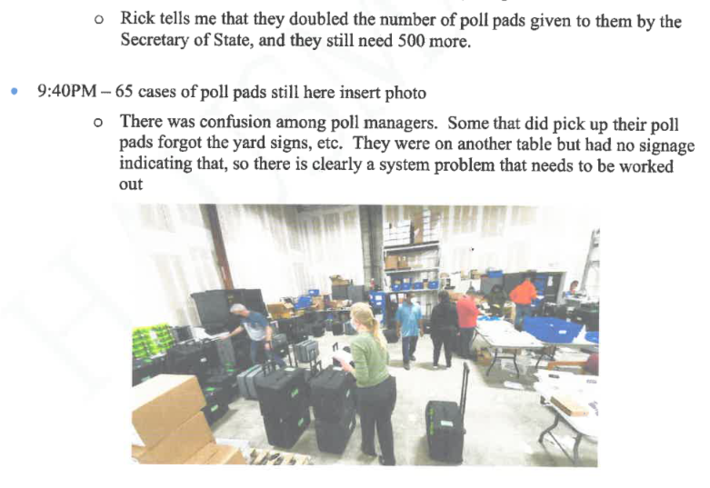 "Learn that Rick reprogramming poll pads earlier was setting up a new precinct for SC11 because someone took the wrong suitcase but only took one," the contractor Seven Hills Strategy wrote late on Nov. 2, the night before Election Day. "Seems to be a mystery who this person was --> Should have chain of custody paperwork!! That means that a stranger just walked out with sensitive election materials?"

The contractor also observed that sensitive election materials were left on a dock at a warehouse without supervision. "Several cases (including SC11) were just left out on the loading dock outside the warehouse," he wrote. "Thankfully the seals were intact."